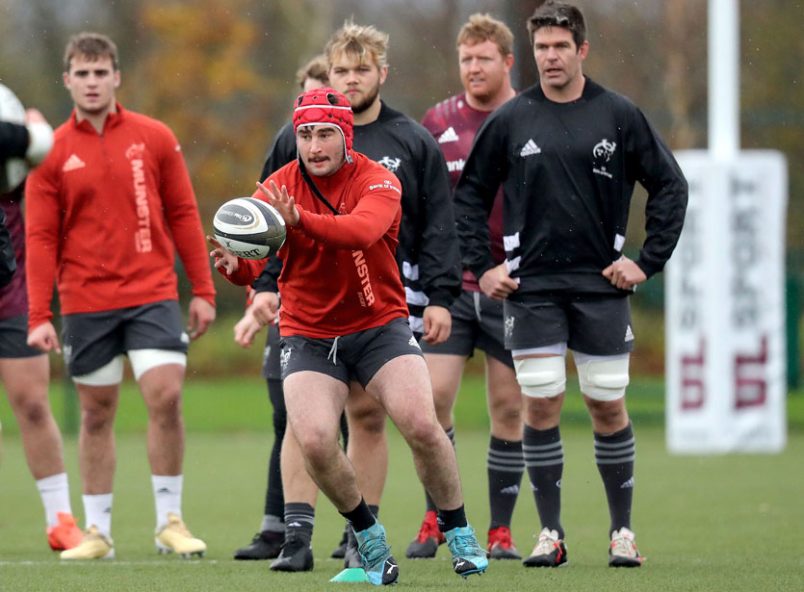 So far this season, five of the province’s 15 Academy players have featured in the Guinness PRO14 with debuts for Josh Wycherley and Thomas Ahern.

Read the latest update from Peter below.

“It’s very disappointing for John, he was on a great run of form and had taken his opportunity with the senior squad and he had a few big performances.

“The surgery went well though and he’s a very adaptable fella, he’s in good form and looking forward to getting going with the rehab.”

“We’ve said since the return of rugby in the summer that the Covid situation is going to take us all to new places and we have to adapt as best we can.

“I’m very proud of how the Academy guys have stood up and trained very well, supported the senior squad and a lot of them are pushing very hard for inclusion to senior squads on merit.

“Obviously Ben Healy is the standout but you look at guys like Josh Wycherley, John Hodnett and Tom Ahern coming on for his debut as well.

“Then there are recent Academy graduates, it’s great to see guys who were with us a year or two ago now turning into senior leaders in the squad.

“Guys like Craig Casey and Gavin Coombes are stepping up so that’s very positive and I think it bodes well for Munster that guys from the Academy are moving into leadership roles in the senior squad pretty quickly.

“And for the guys in the Academy, they can see that if they train hard and play well they’ll get their opportunity and it’s a great carrot for players to have.”

“It is disappointing that there isn’t AIL ruby but it’s very understandable in the circumstances. There will also be restrictions on guys playing AIL rugby with players crossing over bubbles.

“The plan at the moment is to play two ‘A’ Interpro fixtures in December to give as many players as possible game-time.

“In fairness, I think most of the Academy guys have been in the mix for PRO14 selection, bar the injured players.”

“Along with training with the seniors, they also work with Greig Oliver and myself pre- and post-session on their work-on areas with catch-pass, tackle tech and so on.

“They’re getting the best of both worlds training-wise because they’re still doing their individual skills programme with us and also training with the seniors.

“They are learning and developing the whole time and it is a very mature Academy group.”

“James French (neck) has been back to full contact training and he will come back into contention in December.

“The operation went well and he went extremely well in his rehab, he worked very hard with the S&C and rugby staff to get back in good condition and he’s been back scrummaging since last week.

“Eoghan Clarke (hooker) has had a calf issue that has dragged on for him unfortunately and he’s unavailable for the coming weeks.”

We spoke to first year Academy player Alex Kendellen about his pathway from Cork Constitution and PBC to Munster Rugby.