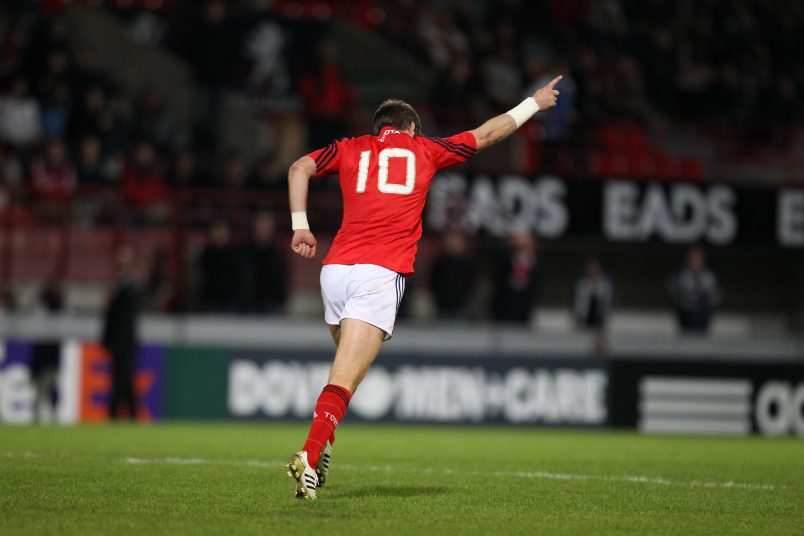 Ronan O'Gara after kicking the winning drop-goal against Castres. Inpho

There are so many moments to choose from and we have picked out 13 occasions where Munster have snatched victory or secured a vital bonus-point.

Not all of the match-winners occur with the clock in the red but you’ll excuse us for including moments like Andrew Conway’s 75th minute wonder try against Toulon.

Trailing 23-21 in injury time of the opening game of the 2011/12 Champions Cup, Munster went through 41 phases before Ronan O’Gara lands a 43-metre drop-goal to secure a stunning win.

One week after his stunning match-winner against Northampton, O’Gara repeated the trick to turn a 24-all draw into a 27-24 win away to Castres.

Munster trailed 26-24 away to Sale Sharks in the opening day of the —-Champions Cup when Ian Keatley nailed a long-range drop-goal in a stunning finish.

Scannell stepped up to land a monster penalty to give Munster a vital 25-24 Guinness PRO14 victory over Glasgow Warriors last season.

Francois Trinh-Duc cleared his lines but Andrew Conway prevented the ball from going to touch before catching Toulon completely off guard with a stunning finish.

Munster were trailing 17-13 in France when Denis Hurley and Tommy O’Donnell to send JJ Hanrahan into space and the out-half brilliantly stepped the final defender to score a dramatic winner.

Munster were desperately chasing the four-try bonus-point away in Wales and the pack came up with a perfectly-executed rolling maul for James Cronin to score in the final play.

Munster were leading Edinburgh 16-14 in the final play but the hosts were deep inside the visitors’ half. Sam Hidalgo-Clyne dropped into the pocket and looked to land the match-winning drop-goal but CJ Stander charged out of the line to block the kick and secure victory.

The famous Miracle Match. Munster needed to win by 27 points and secure a bonus point in the process and led 27-6 after 80 minutes. John Kelly dived over for the fourth try and O’Gara landed the conversion to secure one of the province’s most famous wins.

With five minutes to go, Munster were trailing 14-12 in Belfast. Duncan Williams to Rory Scannell and the Academy centre drilled over a drop-goal to secure

Trailing 23-18 to Ospreys with two minutes to go, Dave Kilcoyne managed to spin his way over to level matters and Tyler Bleyendaal slotted the tough conversion to snatch victory.

Munster were under big pressure in last season’s Guinness PRO14 quarter-final as Benetton looked to secure a famous victory but Hanrahan stepped up to kick a huge match-winning penalty.

Munster went into injury time needing a fourth try to secure the bonus-point against Scarlets last time out with Coombes scoring his second try to clinch all five points.