Friday Night Games For Munster A In The Celtic Cup 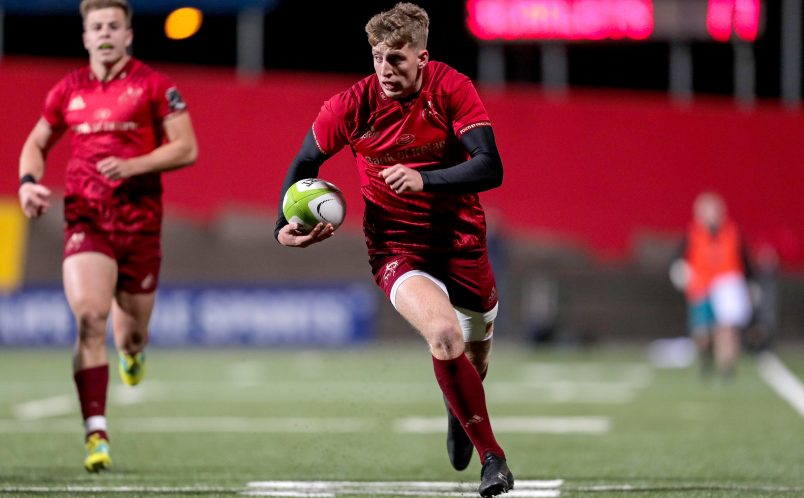 Liam Coombes runs in a try for Munster A in The Celtic Cup last season.

The Celtic Cup returns in August as the joint IRFU/WRU development competition looks to build on the value it delivered to young players in the performance pathway last season.

Munster A’s three home games will all take place at Irish Independent Park with details below.

A host of players across all four provinces used the competition as a springboard to advance their claims for exposure at provincial senior level while others would go on to play a central role in Ireland’s U20 Six Nations Grand Slam success.

The following players went on to represent Munster in the Guinness PRO14 after featuring in the Celtic Cup last season– Alex McHenry, Liam Coombes and Diarmuid Barron.

Members of Ireland’s U20’s squad that achieved a Six Nations Grand Slam and delivered strong performances at the Junior World Cup in Argentina featured prominently for Munster in the Celtic Cup at the start of last season – Seán French, Ben Healy, John Hodnett and Josh Wycherley.

David Nucifora, IRFU Performance Director, said: “The Celtic Cup delivered a lot of what we had hoped it would. The players got exposed to the week to week preparation and recovery that senior professional players must manage and took a huge amount of learnings from those experiences.

“From a coaching perspective the competition simulated the challenges and pressures of preparing and developing a group of players while seeking improvement in performance each week.

“The Celtic Cup also plays an important role in the development of our support staff and that of our referees.”

Peter Smyth, IRFU Head of Elite Player Development, said: “I had first-hand experience of the competition last season in my former role as Leinster Academy Manager and you could see the growth of the group across the 7 weeks of the competition.

“It provided a platform for individuals to build confidence but it also forced them to back up performances and seek improvement the following week. The week-to-week nature of the competition provided the coaches with the challenge of embedding a game plan, tweaking it week to week and problem solving over the course of the tournament. These experiences are invaluable in the development of our coaches at this level.”

The Celtic Cup is competition for emerging professional players from the four Irish provinces and four Welsh regions which is run over eight consecutive weeks. In a change to last year’s format this year’s Celtic Cup is a straight league format with each team playing seven games and the top two ranked sides advancing to the final on Saturday, October 12.

Along with Munster, the competition features development squads from Connacht, Leinster, Ulster, Blues, Dragons, Scarlets and the Ospreys.