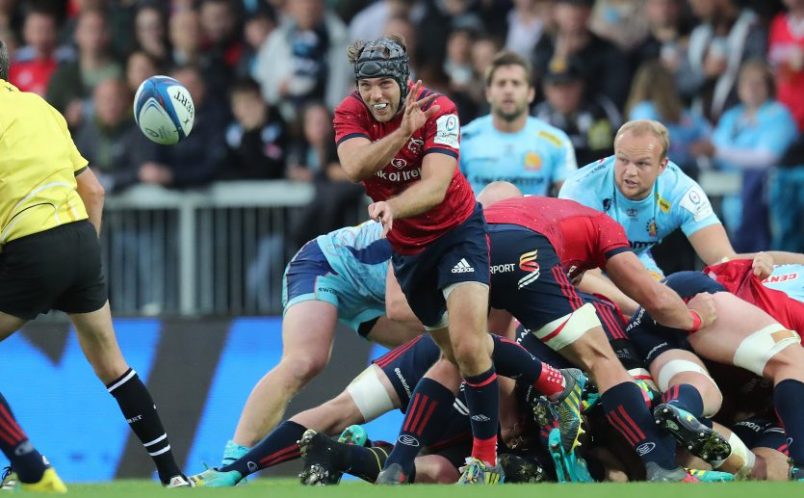 Last week saw the Munster squad and management say their goodbyes to the players that depart the province this summer.

Last week saw the Munster squad and management say their goodbyes to the players that depart the province this summer.

All nine players made a valuable contribution to Munster Rugby and we would like to thank them for their time at the province.

Stephen Fitzgerald moves to Connacht after scoring two tries in seven appearances for Munster. Following three years in the Academy, Fitzgerald was a member of the senior squad for two seasons. James Hart will join a French club side having spent two seasons at Munster, scoring two tries in 16 appearances. The scrum-half also made six appearances for Munster A in the British & Irish Cup and the Celtic Cup. Bill Johnston joins Ulster after scoring 29 points in 12 Guinness PRO14 appearances for the province. The out-half spent two years in the Academy and was a member of the senior squad for two seasons. Ian Keatley departs for Benetton Rugby after eight years at Munster that saw the out-half score 1,247 points in 180 Munster appearances. Keatley is second on the list of Munster’s all-time top points scorers and joint-second in the current squad for appearances made in red. Dave O’Callaghan departs for a French club side having scored five tries in 85 appearances for the province. Named Academy Player of the Year in 2012, O’Callaghan made his Munster debut as a 21-year-old against Ospreys in 2011. Ronan O’Mahony retired from professional rugby with immediate effect on medical grounds in April. The winger scored 21 tries in 70 appearances for the province over six years. He was the joint leading try-scorer for the 2016/17 season with 11 tries. Mike Sherry moves on after 10 years with Munster, scoring 12 tries in 108 appearances for the province. The Irish international enjoyed Magners League success and featured in Munster’s historic win over Australia during the 2010/11 season. Jaco Taute joins Leicester Tigers having scored eight tries in 40 Munster appearances. The South Africa international joined Munster in 2016 and marked his Champions Cup debut with a try against Glasgow Warriors in October 2016. Duncan Williams brings an end to his 11-year spell with the province during which time he made 163 appearances in red and scored seven tries. He played a lead role in Munster’s historic wins over Australia and the Maori All Blacks in Thomond Park, and enjoyed Magners League success in 2011.