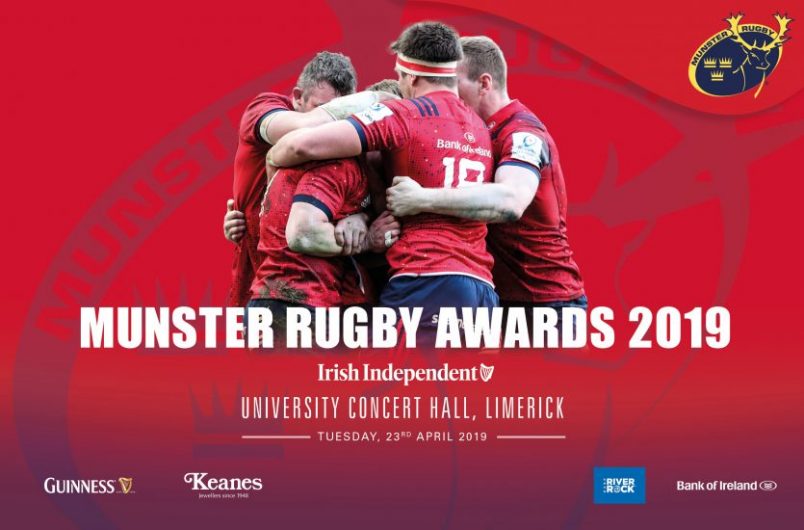 The Munster Rugby Awards, in association with the Irish Independent, take place next Tuesday night, April 23, at the University Concert Hall in Limerick.

The awards are an opportunity for Munster Rugby to review the season to date, recognise excellence and reward the phenomenal work being done throughout the province at both Domestic and Professional levels.

This year, an entertainment programme has been designed whereby the extended Munster family can share in the celebrations.

To cater for the enlarged numbers, the theatre-style awards will be hosted in the University Concert Hall, Limerick.

The event will be hosted by journalist, TV presenter and radio broadcaster, Matt Cooper along with a guest appearance from impressionist Mario Rosenstock.

Doors open at 7:15pm and the Awards begin at 8pm sharp. The dress code is smart casual and supporters that wish to attend (free admission) can register their interest by emailing info@munsterrugby.ie with ‘Munster Rugby Awards 2019’ in the subject line. Please note that limited tickets are available.

The achievement of outstanding individuals and groups in the following categories will be recognised throughout the night:

• Club Mini Section of the Year

• Youth Section of the Year

• Junior Club of the Year

• Senior Club of the Year

• School of the Year

• Referee of the Year

• Young Player of the Year

• Women’s Player of the Year

• Player of the Year