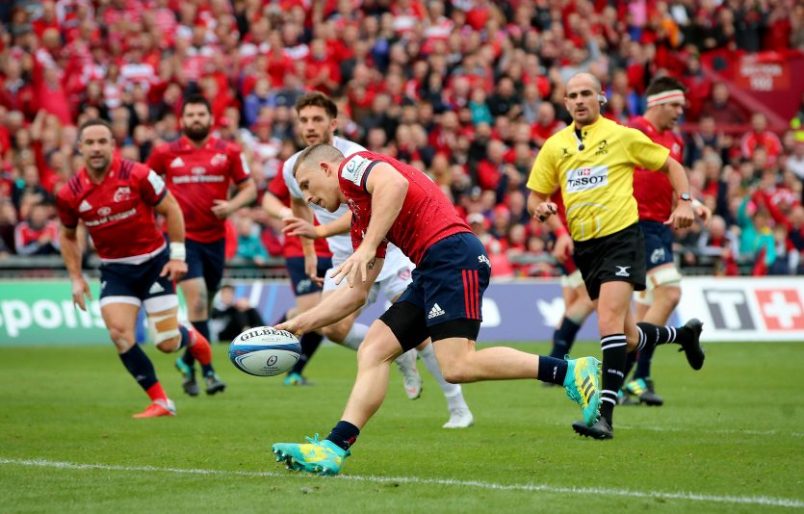 Andrew Conway scores a try against Gloucester in October.

Munster lead Pool 2 having won one and drawn one so far with the the December double-headers set to go a long way towards deciding who will qualify from the Pool.

Top 14 holders Castres are coached by vastly experienced Christophe Urios who featured as a player in the first ever meeting of Munster and Castres in 1996.

Currently lying in seventh place of the Top 14, Castres are among the tightly congested chasing pack behind leaders Clermont Auvergne and second-placed Toulouse.

A bright start to their domestic campaign saw Castres win away at big-spending Montpellier and Toulouse in the opening month of the season.

Their home form was also excellent in the early stages of the campaign but they go into this weekend’s fixture on the back of a surprise 16-13 loss to Agen at Stade Pierre-Fabre.

An impressive start to their European campaign has seen Castres earn a losing bonus point away to Gloucester at Kingsholm before the French side recorded a stunning 14-man 29-25 victory over Exeter Chiefs.

Ahead of the clash, Munster captain Peter O’Mahony said: “They lost to Agen at the weekend at home so they’ll be hurting after that.

“We know how proud they are and how much it means to them to win at home so they’ll be coming here looking to right that and put in a big performance.

“You see the way they really pressurise teams in the Top 14. They’ve a big kicking game, they force teams to concede lots of penalties. They have a very impressive maul, particularly potent from around 20 metres in so discipline is going to be a huge part of the week.

Following Sunday’s clash at Thomond Park, the return fixture at the Stade Pierre Fabre on Saturday, December 15, will have a local kick-off time of 6.30pm (5.30pm Irish time).

Munster travel to face Gloucester at Kinsgsholm in the penultimate Pool game on Friday, January 11, with a 7.45pm kick-off time.

Munster Christmas Match Packs are now on sale with supporters able to purchase tickets for four upcoming games, including Munster v Leinster, and save 10% across the cost of all games.

The Munster Christmas Match Pack is the ideal gift for the Munster fan in your life with the option to purchase tickets for any four home games!

Mix and match with Champions Cup home games against French champions Castres and Exeter Chiefs coming up in the next two months along with the big Guinness PRO14 Interpro derby against Leinster and clashes against Southern Kings, Zebre, Cardiff and Connacht.

Buy adult tickets for four or more games from just €76.50 and €25.20 for a Junior. With so many choices, make sure you get the best prices on offer before it’s too late!