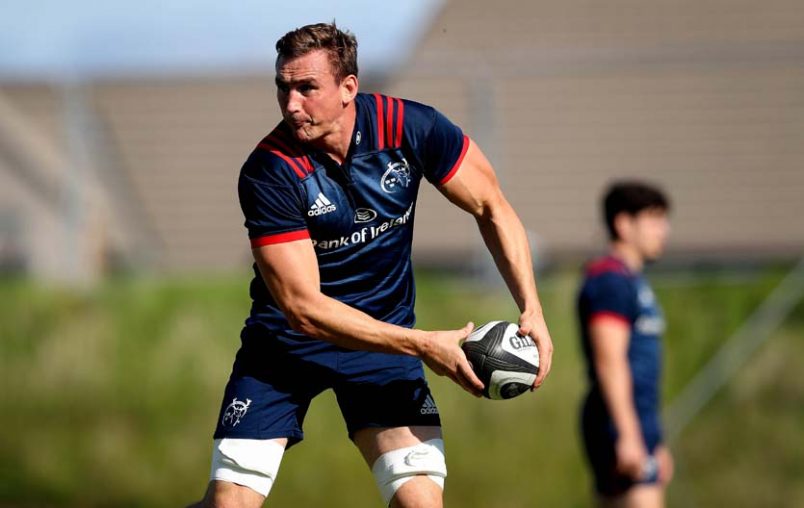 Tommy O'Donnell signs up for a further two years

Munster Rugby and the IRFU are pleased to confirm Chris Cloete, James Cronin, Neil Cronin, Chris Farrell and Tommy O’Donnell have all signed contract extensions, while scrum-half Nick McCarthy is set to join the province.

Munster Rugby and the IRFU are pleased to confirm Chris Cloete, James Cronin, Neil Cronin, Chris Farrell and Tommy O’Donnell have all signed contract extensions, while scrum-half Nick McCarthy is set to join the province.

Chris Farrell, who joined the province at the beginning of the 2017/18 season, has put pen to paper on a three-year deal that will see him remain with the province until 2022, while Chris Cloete has added two years onto his current three-year deal bringing him up to 2022 also.

Scrum-half Nick McCarthy will make the move from Leinster at the start of the 2019/20 season after signing a two-year deal. The 23-year-old has made 30 appearances in blue to date, scoring 3 tries. A former Ireland U20s player he made 18 appearances over two 6 Nations and World Championship campaigns.

Farrell, who has yet to feature this season as he rehabs a knee injury sustained in February, has made 13 appearances for the province, scoring three tries. The 25-year-old centre has represented Ireland on three occasions, including a man of the match performance on his 6 Nations debut against Wales.

In his 12th season with the province, and one of the squad’s leading lights, O’Donnell has made 162 appearances in red, scoring 19 tries. A former Academy Player of the Year and Player of the Year he led Munster to victory in their historic win over the Maori All Blacks in November 2016. The 31-year-old back-row has represented Ireland on 12 occasions, scoring two tries.

On making his debut in April 2013, prop James Cronin went on to be awarded Academy Player of the Year a month later. The 27-year-old has scored 14 tries across his 108 Munster caps, and has made three appearances for Ireland. In November 2017 he represented the Barbarians against Tonga in Thomond Park.

Scrum-half Neil Cronin made his return to professional rugby at the start of the season off the back of impressive performances with his club side Garryowen FC in the All Ireland League. The 25-year-old will have to put the teaching career on further hold as he continues with the province until 2021. On making seven appearances in red he made his Champions Cup debut against Exeter Chiefs last weekend.

Making his debut against Dragons in November ’17, South African back row Cloete made quite an impression in his first season, scoring three tries in his 10 starts. The 27-year-old has made 14 appearances for the province.

On the Academy front Coombes and Daly, who are both in their final year of the programme, have secured promotion to the senior squad at the beginning of the 2019/20 season having signed two-year contracts.

20-year-old Coombes is a product of Skibbereen RFC and Bandon Grammar and made his Munster debut against the Cheetahs in last month’s season opener. The no.8 has scored six tries in 16 appearances for Munster A, and plays with Young Munster in the All Ireland League. An Interpro winner with Munster at U18 Schools and U19 level, Coombes has represented Ireland U19s and U20s.

A product of Highfield RFC, Presentation Brothers College and Cork Constitution FC, 21-year-old Shane Daly also made his senior Munster debut against the Cheetahs last month. An Ireland 7s and U20s international, Daly won the All Ireland League Division 1A title, the Bank of Ireland Munster Senior Challenge Cup and the Bateman Cup with Con in 2017. Adept at playing as a centre or on the wing, Daly won an Interpro title with the Munster U20s in 2015.