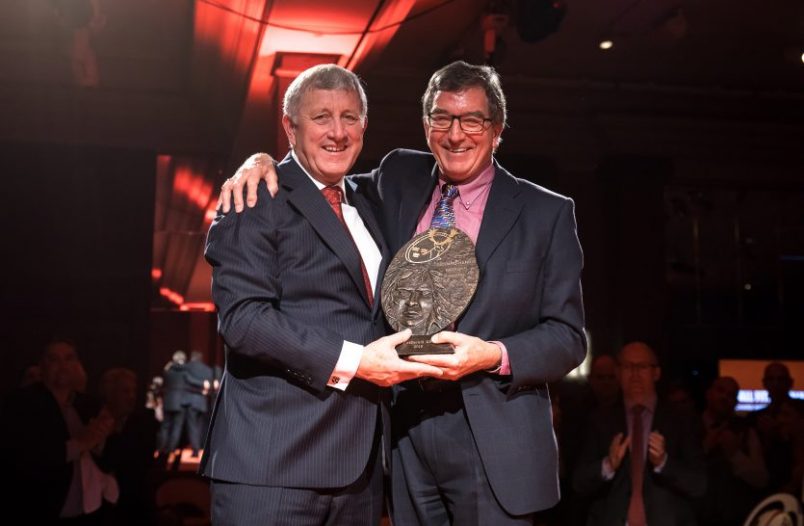 The prestigious award recognises an individual who, through his or her life or work, encapsulates Munster’s values of passion, integrity, ambition, excellence and community.

Having grown up in the shadow of Thomond Park before making a global impact not only in his chosen career but to society and humanity, Niall FitzGerald is an extremely worthy recipient of the award.

A former St Munchin’s College student and lifelong Munster supporter, Niall was formerly Chairman and CEO of Unilever, Chairman of Reuters, and Chairman of the British Museum.

Niall has held a vital role at Munster Rugby for the past five years as Chairman of the Commercial Board since its inception in 2013.

Introducing Niall as the recipient of this year’s Richard Harris Patron’s Award, Munster Rugby Management Committee Chairman Gerry O’Shea said: “Munster would not be anywhere near where we are today without his commitment, vision and courage. It’s easy to have a dream but only hard work delivers.

“From our facilities in Thomond Park, Irish Independent Park and the High Performance Centre at the University of Limerick we are now second to no-one. Our athletes and the coaching staff are equipped with the best support structures to allow them perform to the maximum of their abilities.

“Producing and keeping marquee players is a challenge that takes a lot of planning, managing and funding. It would not be possible without the support and commitment given by tonight’s recipient. Tonight, on behalf of Munster Rugby, in recognition of your outstanding contribution to Munster and Irish Rugby, it our pleasure to honour the recipient of the Richard Harris Award, Niall FitzGerald.”

The award is named in honour of Richard Harris, a Munster Rugby patron in its truest sense. Everywhere he went he espoused his love of Munster Rugby and what it meant to him. Having represented Munster Rugby both at Schools and U20s level, he understood and demonstrated the heritage, values and passion which Munster Rugby instil in all those who play with and support them. Such was his pride in the jersey, he treasured his Munster U20s jersey and famously wore it to the European Cup final in 2002.

Sculptor Jarlath Daly created a custom piece which was originally presented to the Harris Family in 2014, with a replica being presented to a new recipient each year thereafter at Munster Rugby’s Annual London Dinner.