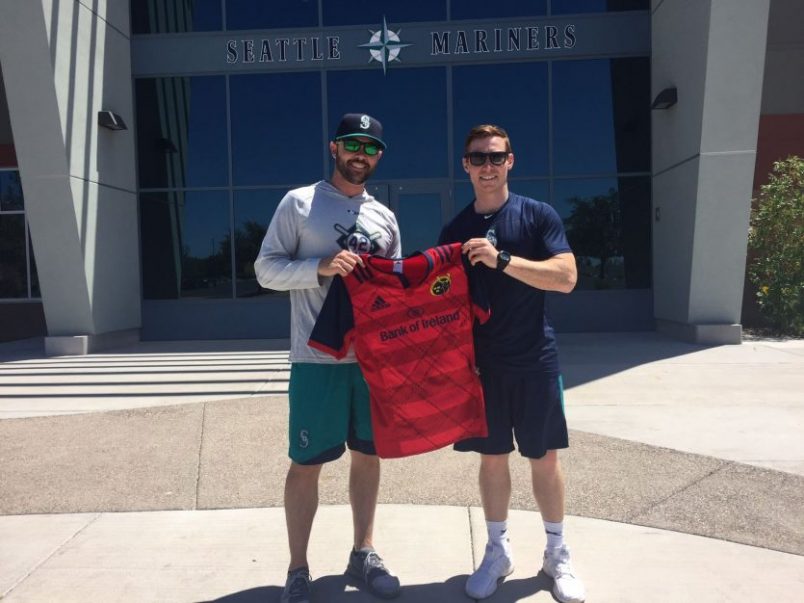 Cathal Sheridan with Derin McMains of the Seattle Mariners.

Who better to be a resource to up-and-coming players than a former Academy graduate, a player who was forced to retire early through injury, and a mental health advocate?

Having commenced the newly-created role at the start of the current season, Sheridan draws on his education and experience as a professional sportsperson to engage with the next generation of Munster players.

“It’s something I was always very interested in. My undergrad while I was an Academy player myself was in Psychology and English, and then I followed that up with a masters in Sports Psychology.

It’s for this reason Cathal most recently made the trip to Peoria, Arizona.

“I reached out to the Seattle Mariners’ Peak Performance Coordinator Derin McMains and headed over to their spring training base in Arizona to shadow Derin for the week.

“It was a hugely beneficial experience and it was incredible to see what they’re doing for their players, while at the same time, it made me realise we are definitely doing a lot of good things here, but like anything, we can always improve.

“Watching everything that has been done to improve the culture in Seattle, and the performance program that Derin and the coaches have put in place with the Mariners over a couple of years, it’s easy to see how the off-field work translates directly into performance and success on the pitch this season. It’s a great model to learn from.

“In Munster we are very fortunate as we have a unique environment and community already that we can further build on with our players. Everybody wants to be here, everybody wants to play their part.”

Looking at his role within Munster Rugby, Sheridan very much sees himself as a resource to be used if a player wishes and if they feel it will be of benefit.

“From my own experience, and with the world we live in today, mental health and mental wellbeing are hugely important, and when it comes to working with younger individuals at a performance level, I do believe it’s all about simplifying the process.

“Some players I’d see every week, some once a month, some every few months, and some I haven’t sat down with at all, it’s very general and not a hard and fast rule.

“When it comes to performance it’s not a one-size fits all approach, and all the work I would do with lads is strictly confidential on a one-on-one basis. We would also facilitate workshops with the wider group which are a valuable exercise too.

“It’s about the person first, and then the player after that. The player will have the talent and ability and all that, so my role along with the other staff in the Academy is about making sure we take care of everything else.”