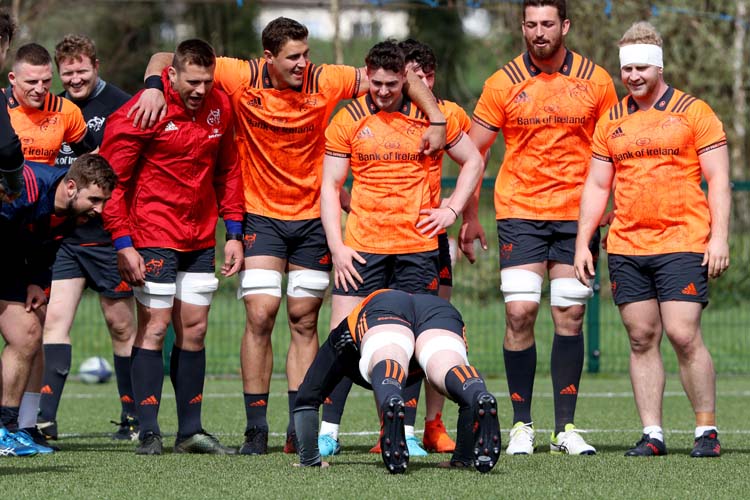 Last to the team huddle, Peter O'Mahony does burpees as team-mates watch on.

Yesterday saw the Munster squad begin preparations at the High Performance Centre in UL for Sunday’s Champions Cup semi-final against Racing 92 at the Stade Chaban-Delmas.

See the best photos from training and the press conference here.

Head Coach Johann van Graan, Billy Holland and Andrew Conway spoke to the media in the HPC ahead of training and van Graan provided the below injury update.

“Earlsie will be back on the field this week and we’re looking forward to seeing how he has recovered since his injury. Jack O’Donoghue will also be on the field later in the week. We’ll just take it day by day and give guys as much time as we can to make the right decisions to select the team that’s all ready to go on Sunday,” said the Munster Head Coach.

Van Graan was pleased with how the two-week tour to South Africa went as Munster won both of their games – against the Southern Kings and Cheetahs.

“We said we needed balance on the tour, teams don’t go on tour so much these days. We bonded on the tour as a squad, we had some time to sit around the dinner table and get to know each other a lot better but we also trained really hard. We trained smartly and tried to rectify one of the things we weren’t happy with against Toulon. We gave the Kings and the Cheetahs the respect that they deserved while also doing one or two small things in preparation for Racing 92.”

Billy Holland captained the side against the Southern Kings and echoed van Graan’s views of the South Africa tour.

“Ultimately we needed eight points from the trip and we got nine. It was a change of scenery and something different. You’re training in the sunshine and on your day off you’re going up Table Mountain not strolling down Patrick’s Street in the rain so it was a nice change of scenery and refreshing at this stage of the season.

“From a morale point of view, when you go away as a squad like that you get to know fellas very well and I think there are a lot of guys much closer after the two weeks. That doesn’t get you a win against Racing but I think it puts you in a better position.”

Looking ahead to the challenge on Sunday, Andrew Conway knows that Munster have a huge task on their hands.

“They’ve got big players, incredible individuals with hundreds of internationals caps between them. There are guys who know how to win knockout games of rugby in both teams and we know Racing quite well from the last few years. They will be looking at opportunities that they feel they can take against us and vice versa. We’ll put a plan in place that we think is our best shot at beating them.”

Incoming Head of Athletic Performance Denis Logan visited Limerick and watched training from the sidelines ahead of joining the province in May.

In squad news, Dave Johnston will depart the province for English Championship side Ealing Trailfinders at the end of the season.