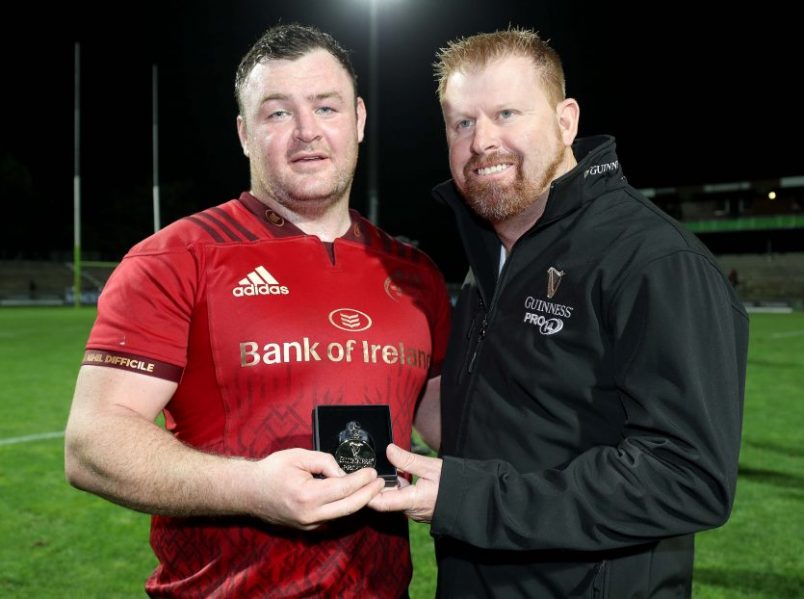 David Kilcoyne receives his Man of the Match medal from Jason Grieve after the win over Southern Kings.

Dave Kilcoyne marked his 150th Munster appearance with a Man of the Match performance and his 20th try for the province against Southern Kings in South Africa last Saturday night.

The loosehead prop reached the landmark just over six years after making his senior debut against Connacht as a Greencore Munster Rugby Academy player in December 2011 at Thomond Park.

The Limerick man joined the Academy in 2010 and progressed quickly through the ranks. 2012 was a breakthrough year for the former Ardscoil Rís student as Kilcoyne won the British & Irish Cup with Munster A in April, moved up to a senior contract in the summer, made his Heineken Cup debut away to Racing in October and earned his first Ireland cap against South Africa in November.

Kilcoyne started seven of Munster’s eight Heineken Cup games in the 2012/13 season and featured in his first 6 Nations game in 2013 before finishing the campaign on Ireland’s tour to North America.

The 2013/14 season was another very successful one as the Limerick prop was named on the PRO12 Dream Team and made more appearances than any of his team-mates, playing in 30 of Munster’s 31 games.

That form saw Kilcoyne included in the Ireland squad for the summer tour to Argentina and he also featured in the Guinness Series victories over South Africa and Georgia later that year, scoring his first try for Ireland in the game against Georgia.

A knee injury meant that he missed out on the 2015 6 Nations but he finished the 2014/15 season strongly, starting in both the PRO12 semi-final and final as Munster defeated the Ospreys but lost to Glasgow in the decider.

The durable prop played in 26 of Munster’s 28 competitive games in the 2015/16 season and was subsequently selected for Ireland’s Summer Tour to South Africa.

Kilcoyne again made the most Munster appearances last season as he played an incredible 31 times. That form saw him selected on Ireland’s Summer Tour to the USA and Japan, where he featured in all three Tests.

The 29-year-old has continued his impressive run this year and has already featured 19 times this season. To date, Kilcoyne has earned 22 Ireland caps and is set to make his 151st Munster appearance against the Cheetahs in Bloemfontein on Friday night.