A Look Back At Our Previous Home Quarter-Finals 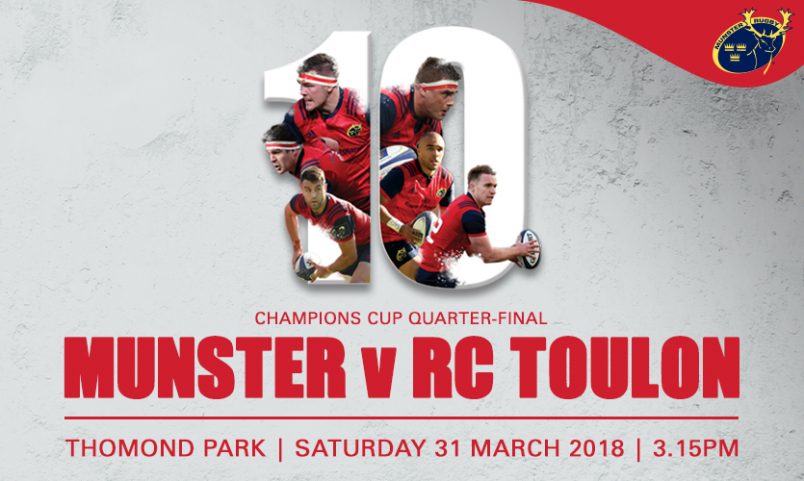 As the Munster squad prepare for the province’s 17th quarter-final and 10th home quarter-final in the Champions Cup – both competition records – we take a look back at the nine previous quarter-finals played on home soil.

As the Munster squad prepare for the province’s 17th quarter-final and 10th home quarter-final in the Champions Cup – both competition records – we take a look back at the nine previous quarter-finals played on home soil.

Since the inaugural year of the Heineken Cup in 1995, Munster have forged a reputation as one of Europe’s top clubs.

It all kicked off on a Wednesday afternoon in Limerick as Cardiff visited Thomond Park on November 1, 1995. The game ended with a 17-13 win for a side that featured the likes of Anthony Foley, Mick Galwey and Peter Clohessy.

Having come close to qualifying from their Pool on a number of occasions in the early years, Munster finally made the breakthrough in the 1998/99 season but lost 23-9 away to Colomiers in the quarter-final.

The following year, they topped a Pool that also contained Saracens, Colomiers and Pontypridd to secure an all-important home quarter-final against Stade Francais. Four first-half penalties from Ronan O’Gara laid the platform for a strong Munster side to secure a semi-final place for the first time as Dominic Crotty and Anthony Horgan touched down.

Munster went on to beat Toulouse 31-25 in a thrilling semi-final in France before losing 9-8 to Northampton in the Twickenham decider. Anthony Foley of Munster goes over for a try. Munster v Biarritz 28/1/2001

The hosts won a barnstorming match against the Basque club with Declan Kidney’s men running up a 37-point score thanks to two men.

Ronan O’Gara kicked a magnificent seven penalties and a conversion as Anthony Foley scored a majestic hat-trick of tries.

The European adventure ended at the next stage with Stade Francais earning a controversial 16-15 semi-final victory after a John O’Neill try was incorrectly disallowed. Munster fans at the end of the match in Thomond Park. Munster v Stade Francais 10/4/2004

After earning away quarter-final wins in 2002 and 2003, Munster stormed into a record fifth Heineken Cup semi-final in a row thanks to a five-point victory at Thomond Park.

Marcus Horan, Shaun Payne, Rob Henderson and Mike Mullins scored tries in the win before an agonising 37-32 loss to Wasps at Lansdowne Road ended Munster’s campaign at the semi-final stage. A packed crowd of 48,500 supporters saw Munster come from behind after trailing 10-7 at half-time with Paul O’Connell scoring the only Munster try.

Four second-half penalties from the trusty boot of O’Gara earned the victory with Munster back at the Dublin venue three weeks later to secure a 30-6 semi-final win over Leinster.

Captain Anthony Foley, who had played in that first European game almost 11 years before against Cardiff, led the team to European glory thanks to a 23-19 win over Biarritz in the final played, fittingly, in Cardiff.

Having won their second European Cup the previous season, Munster were rampant in this one-sided quarter-final.

Munster travelled to Croke Park for another semi-final against Leinster in April in front of a then-world record crowd for a club match but fell to a 25-6 loss. Saints No Match For Munster

Having beaten Northampton to top spot in Pool 1, the sides met again in the quarter-finals with Munster securing a ninth semi-final spot.

Munster met Biarritz in San Sebastian at the semi-final stage but fell to an 18-7 defeat. Worrying times for a Munster fan during the match. Munster v Ulster 8/4/2012

An outstanding start to the game helped Ulster become the first side to beat Munster in a home quarter-final and qualify for their first semi-final since winning the competition in 1999.

Trailing 19-0 at one stage of the first half, Munster fought back as Simon Zebo touched down and Ronan O’Gara kicked a conversion and three penalties but Ulster held on for the win. Munster made light work of Toulouse in a repeat of the 2008 Heineken Cup final as they ran in six tries with replacement CJ Stander awarded Man of the Match.

Munster met reigning champions Toulon in the semi-finals at the Stade Velodrome but were beaten 24-16.

Late tries from Darren Sweetnam and Andrew Conway put the gloss on the scoreline as Munster secured a place in the semi-finals for a record 12th time.

Munster’s campaign was ended once again at the semi-final stage as Saracens proved too strong at the Aviva Stadium.