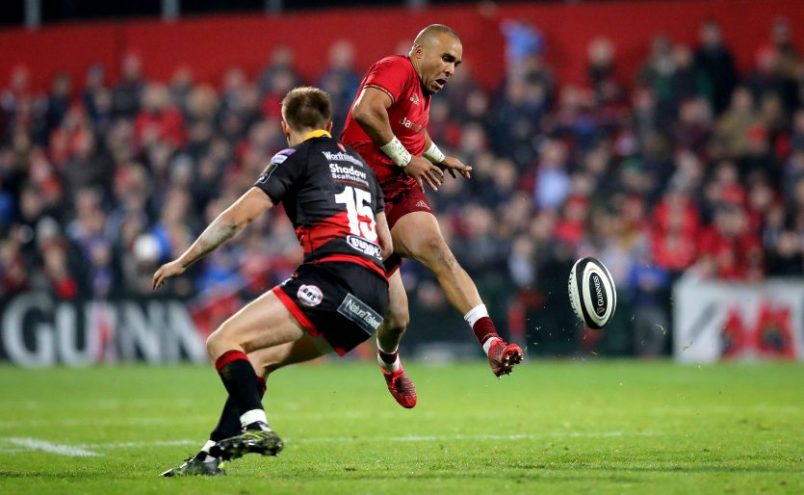 Simon Zebo is hopeful that Munster can get back to winning ways on Friday night in his final game at irish Independent Park against Glasgow Warriors (7pm).

Simon Zebo is hopeful that Munster can get back to winning ways on Friday night in his final game at irish Independent Park against Glasgow Warriors (7pm).

A bumper crowd is expected for Zebo’s last game in Cork before he departs for Racing 92 next summer. Tickets are still available online for Munster v Glasgow on Friday night here.

The 27-year-old, who has scored 59 tries in 137 appearances for Munster, initially made his mark at Irish Independent Park in his school days with PBC.

“I have great memories of the venue,” says Zebo. “We beat Christians in the schools’ final which made it even sweeter. And I scored the best schools try ever scored there – a 110-metre try,” he joked.

“John Ryan was in the Christians team. He was actually on the pitch and I ran past him. I actually ran past him twice! I let him know about it as much as possible. The schools’ games would have been very big for us. We had a lot of great memories, that’s where I started.”

Looking ahead to Friday night’s game against in-form Glasgow Warriors, who have already beaten Munster once in Scotstoun earlier this season, Zebo is eager to right the wrongs of last weekend in Cardiff.

“They are a team red hot in form,” he said. “It will be a big challenge for us, and we won’t be able to afford a slow start like we did last weekend. In order for us to get the win we need to start really well.

“It is very exciting to go back and play in Cork; it’s my home county and it is one of the nicest pitches I have played on.

“The crowd are so close to the pitch so that whenever you do get to score you get to enjoy it, and feel how loud they are. I have lots of great memories. Every time I get to play in a red jersey in Cork it is extra special for me because it’s my home county. My standout memory would probably be in a pre-season friendly against Leicester Tigers I think. I came on, and replaced Doug Howlett, in one of my first big games. To replace a hero of mine was a special moment for me. That was probably my favourite memory from this stadium.”

Since making his Munster debut against Connacht eight years ago, Zebo has progressed from young Academy star to senior player and established international.

“When I started there was a change in the guard – there was the old heads like ROG and Paulie and Dougie, and these guys who were leaving. But the best thing was the new group coming through – Earlsy, Peter, Conor and myself and just seeing how we have evolved as a squad, and maturity, and how we have turned into those kind of leaders and driving on Munster Rugby – this has been one of the best things about it. There’s been a lot of new faces and people coming and going and adding to Munster Rugby as best they possibly can, and that’s been another positive. Hopefully we keep going in an upwards direction and get some trophies.”

When asked what he will miss most when he departs next summer, Zebo said: “The home fixtures, and playing in front of the fans. It’s something that is going to hurt the most, leaving them, because I’ve such a great relationship with the supporters of Munster Rugby. I’ll miss my team mates, and everyone involved with Munster Rugby – we a real close knit family so it’s going to be tough saying my final goodbyes.”

A stroll down memory lane with Simon Zebo as he recalls his standout memory from playing at Irish Independent Park.#MUNvGLA #SUAF pic.twitter.com/bor4ICX8NH

State Of Play | Your Questions Answered

VIDEO: O’Callaghan Happy To Be Back