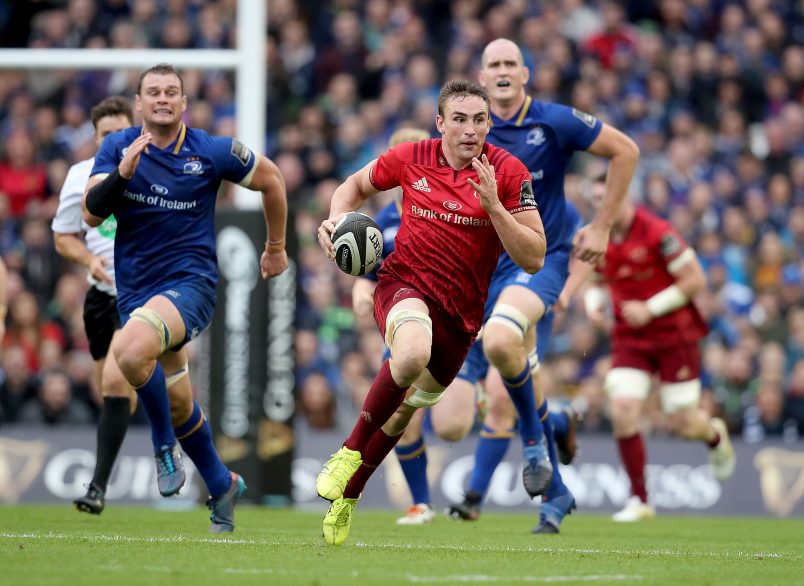 Tommy O'Donnell in action at the Aviva Stadium this season. ©INPHO/Dan Sheridan

Should he feature for Munster against Racing 92 at Thomond Park this weekend, Tommy O’Donnell will win his 150th cap for the province, becoming just the third player of the current squad to do so, after Billy Holland and Ian Keatley.

Should he feature for Munster against Racing 92 at Thomond Park this weekend, Tommy O’Donnell will win his 150th cap for the province, becoming just the third player of the current squad to do so, after Billy Holland and Ian Keatley.

The back row first took to the rugby field at Clanwilliam FC, going on to represent Ireland Youths, U19 and U20, and was part of the U20 Grand Slam winning team of 2007.

A graduate of the Greencore Munster Rugby Academy, by the age of 27 Tommy hit the century mark in a red jersey crossing for a try against Treviso in Cork in 2015 having also made his debut at Irish Independent Park – then Musgrave Park – against Scarlets in 2007.

With the likes of Wallace, Coughlan and Leamy all in situ early on, O’Donnell had to bide his time.  Featuring in Munster’s famous win over Australia at Thomond Park in 2010, it wasn’t until 2011/12 that his huge work ethic and meticulous attention to detail paid serious dividends, making 19 first team appearances that season, including his first European cap against Scarlets and his first European start against Ulster in the quarter final.

The following season, despite two injury-enforced spells on the sidelines, the flanker was named Munster Player of the Year, beating off stiff competition from Dave Kilcoyne and Simon Zebo with 21 impressive outings in which he bagged four tries.

It’s no surprise that Joe Schmidt and Ireland came calling that summer with the Tipperary native winning the first of his 12 international caps to date against the USA in Texas.

O’Donnell has had more than his fair share of injury setbacks over the seasons, most notably a hip dislocation that kept him out of contention for the 2015 Rugby World Cup.  Yet each time, dogged determination has seen the now 30-year-old come back fitter, stronger and hungrier from everything thrown his way.

Still a key figure in the Munster pack with his trademark explosive runs, perhaps the proudest of his 149 appearances so far was when he captained Munster for the first time on yet another historic night at Thomond Park.  Despite missing most of their international contingent, O’Donnell led an inspired Munster performance against the Maori All Blacks last November where, unlike 2008, there was to be no late heartbreak against a New Zealand side.  Fittingly, Tommy was the man to boot the ball gleefully into touch – Munster winning 27-14.

And with plenty more miles left on the clock, it would come as no surprised if one day the Tipp-man entered Munster’s most exclusive club, joining Mick O’Driscoll, Alan Quinlan, John Hayes, Marcus Horan, Peter Stringer, Ronan O’Gara and Donncha O’Callaghan with 200 plus caps!

Be there to show your support for Munster in the Champions Cup this Saturday at 5.30pm.