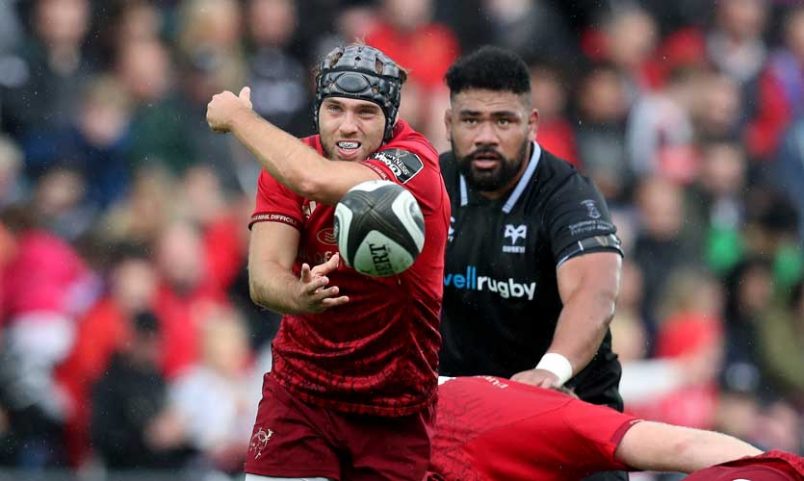 Duncan Williams in action against Ospreys earlier this season.

Catch up on Saturday’s Guinness PRO14 action at the Liberty Stadium in Swansea as Munster made it three wins from three to continue to top Conference A.

Catch up on Saturday’s Guinness PRO14 action at the Liberty Stadium in Swansea as Munster made it three wins from three to continue to top Conference A.

With tries from Jean Kleyn and Darren Sweetnam, and 11 points from the boot of Tyler Bleyendaal, Munster held on for what Rassie Erasmus described as a ‘gutsy’ 21-16 win.

Speaking in the immediate aftermath of the win in Wales, Erasmus commented, “I think getting through games like today, the young guys like Sean and Liam and winning games like this, you will build squad depth and then when the likes of Keith Earls and Conor Murray come back you don’t have to always rely on them. That will be the secret of having a healthy squad come May.

“It was an ok performance (v Ospreys). The first 10 to 15 minutes actually set the tone in the game. We had two missed penalties to take it 6-0 and then just a forward pass from Chris Farrell and another player which could have been 15-0. We threw a few points away early in the match and I always had the feeling that it might bite us later in the game.

“Then we got some stability there and we went into half-time really solid and second half then the rain just came down really hard and I think both teams struggled with the conditions in the second half.

“Last year we gutsed out a lot of games, close games. This game was close at the end and Ospreys really had a lot of heart and character to almost score in the final second. But for us not to lose that winning at the death is nice to keep that habit going. It is something that you can easily lose, but we didn’t tonight.

“It is an away game against Ospreys who were semi-finalists last year. We have played them now four times in 14 months, so you always feel somewhere the loss is going to come and we gutsed it out and that is a positive.”