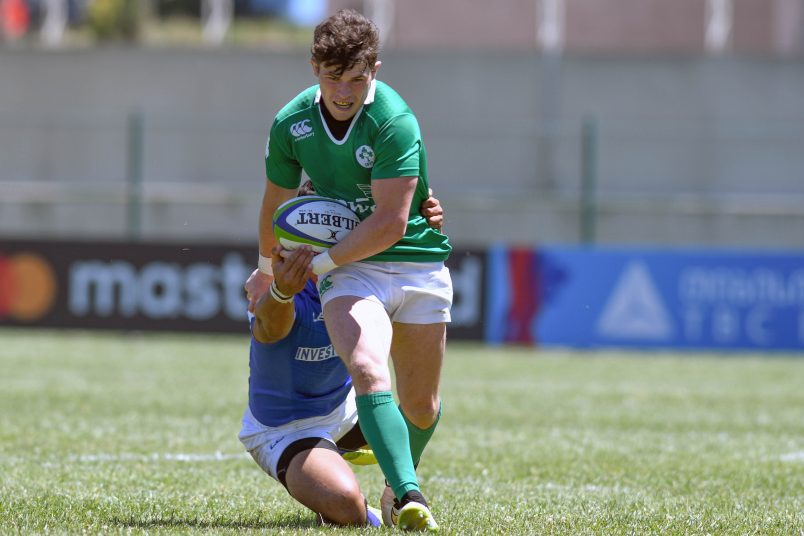 Calvin Nash on the attack against Samoa today. ©INPHO/Levan Verdzeuli

Producing a clinical and dominant performance when it was needed most, Ireland U20s today recorded a comprehensive 52-26 win over Samoa, ensuring their place at next summer’s World Rugby U20 Championship.

Three losses on the bounce – against Italy, Scotland and New Zealand – meant that Irish qualification rested on an Irish win in today’s 9-12th place play-off – no less than 17 injuries not making Ireland’s task any easier in the lead up to, and during, the Championship.

One of nine Munster-men one the field today, Fineen Wycherley was among the try scorers as Peter Malone’s men crossed for four tries before the interval – Ronan Kelleher, Peter Cooper and Oisin Dowling also dotting down with Conor Dean slotting three conversions.

Calvin Nash, who along with Wycherley made his PRO12 debut for Munster this season, continued the rout upon the resumption, and there would be further Samoan heartbreak thanks to Kelleher – completing his brace – Ciaran Frawley and Caelan Dorris.

With one game left to play for the emerging charges, Ireland will face the winners of today’s Argentina versus Georgia clash in Tbilisi on Sunday at 11.30am.