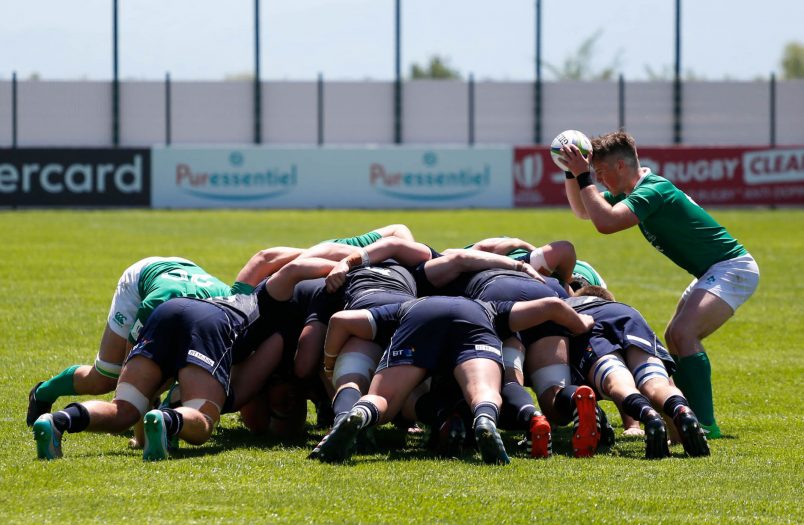 Munster's Jack Stafford feeds the ball into the scrum against Scotland this morning. ©INPHO/Achi Gegenava

The Ireland U20s succumbed to their second defeat at the World Rugby U20 Championship in Georgia, going down 32-28 to Scotland in a hugely entertaining eight-try contest.

Scotland’s ambition with ball in hand and infectious attacking style was rewarded with five tries in sun-kissed Kutaisi. Having erased a 10-point deficit, tries from Ross McCann and Fraser Renwick had the Scots 12-10 ahead at half-time and further touchdowns from influential backs Darcy Graham, Connor Eastgate and Robbie Nairn guided them to a well-earned bonus point.

Injury-hit Ireland showed a lot of tenacity, particularly in the second half when they twice got it back to a two-point game and also cut the deficit to four points late on, but Jack Kelly’s brace of tries – adding to Munster and Shannon scrum half Jack Stafford’s earlier score on his first start – was not enough in the end.

Ireland’s other 13 points were kicked by Conor Dean and Munsterman Alan Tynan, and as Peter Malone’s youngsters come to terms with a frustrating second loss in Pool B, they must rally for a big final push against leaders New Zealand at the same venue on Thursday (kick-off 3.30pm local time/12.30pm Irish time).

Having slipped up against Italy in midweek, Ireland were determined to get back to winning ways and they were chasing their second victory of the season against Scotland whom they edged out 20-19 in Cumbernauld at the start of the U20 6 Nations.

The Scots, who lost 42-20 to the Baby Blacks, looked to stretch Ireland early on, winning Blair Kinghorn’s kick-off and moving the ball at pace in a frenetic opening. They had the first sight of the try-line but number 8 Matt Fagerson dropped the ball in contact.

Kinghorn overcooked a subsequent penalty, kicking it dead, and although there were unforced errors from both sides in the 26-degree heat, winger Kelly lifted Ireland with some excellent defensive play, getting to Eastgate’s kick through and winning a penalty which moved his side up towards halfway.

Having got into the Scottish half, Ireland used the platform of a scrum to launch their backs with quick hands. Munster’s Calvin Nash did well to keep the attack going and centre Gavin Mullin went close to scoring from a neat grubber kick with the ball unfortunately not sitting up for him.

An overthrown Scottish lineout allowed Malone’s charges to keep the pressure on and after Ciaran Frawley was just held up on the right, out-half Dean lobbed a 17th minute penalty through the posts to punish his opposite number Eastgate who was caught offside.

Four minutes later, Ireland had their first try as quick thinking from Stafford saw him tap and go and force his way over from five metres out. His forwards, who were enjoying a mini purple patch, had set up the opportunity with a couple of well-worked mauls and Dean converted for a sudden 10-point advantage.

Scotland struck back by the half hour mark though as a classy counter attack – led by the Scotland Sevens-capped Graham from his own 22 via a brilliant offload from Stafford McDowall – saw centre McCann collect the winger’s pass off the deck to scamper in by the posts. Eastgate’s simple conversion close the gap to three points.

The Scots held onto the momentum approaching the interval and Ireland captain Paul Boyle was warned about his side’s discipline as they leaked successive penalties. Scotland turned down two kickable shots and those decisions eventually paid off, the stubborn Irish defence folding in the 39th minute as hooker Renwick scored from the back of a maul – 12-10.

Ireland restarted in promising fashion, an intercept in midfield by Munster’s Gavin Coombes launching the backs but Kelly was forced into touch. Yet, the Scots’ quick-witted attack soon found holes again at the other end, with Eastgate’s 47th-minute penalty duly extending their lead.

A powerful charge from hooker Ronan Kelleher got Ireland back on the move and into scoring range, a Scottish offside allowing Dean to make it a two-point game once more. However, Kinghorn capitalised on loose Irish kicking and poor follow-up defence to make a full 40 metres, and a quick recycle saw speedster Graham claim Scotland’s third try of the afternoon, converted by Eastgate.

Nonetheless, Ireland’s resilience came to the fore yet again, former skipper Kelly picking a great line to burst onto replacement Angus Curtis’ inviting pass and evade two defenders for a 57th minute try. Debutant Curtis had replaced Dean at out-half and full-back Tynan took over the kicking duties, nailing the conversion to set up a fascinating final quarter at 22-20.

Scottish captain Callum Hunter-Hill popped up twice in another potent attack which teed up a five-pointer out wide for Eastgate with 61 minutes gone. Ireland, who duly sent four replacements on, hung in there at 27-23 thanks to a crisp penalty strike from Tynan.

Try number five arrived barely a minute later for the Scots, who made a mammoth 700 metres over the course of the game and beat 38 defenders. Nairn joined his wing colleague Graham on the scoresheet after McCann drew the final defender to set up the Harlequins clubman. Eastgate missed the conversion, but Scotland were within reach of their first win over Ireland in six U20 Championship meetings.

Ireland showed plenty of character to hit back with their third try, making Scotland sweat in the final few minutes with their lead cut to four points. Jack Regan’s 75th-minute turnover and a pacy break from fellow replacement Michael Silvester had the Scots scrambling back before Kelly showed good strength to reach over in the right corner via a Tynan offload. The latter could not convert, however, and a last-minute knock-on from Caelan Doris as he attempted to take a quick tap brought Ireland’s challenge to an end.

Now looking to match the heroics of the 2016 team’s memorable victory over the Baby Blacks, Ireland U20 captain Boyle said afterwards, “Scotland are a good physical side and they just came out on top in the end. That’s two losses in a row, but we believe we can regroup and beat New Zealand again.”