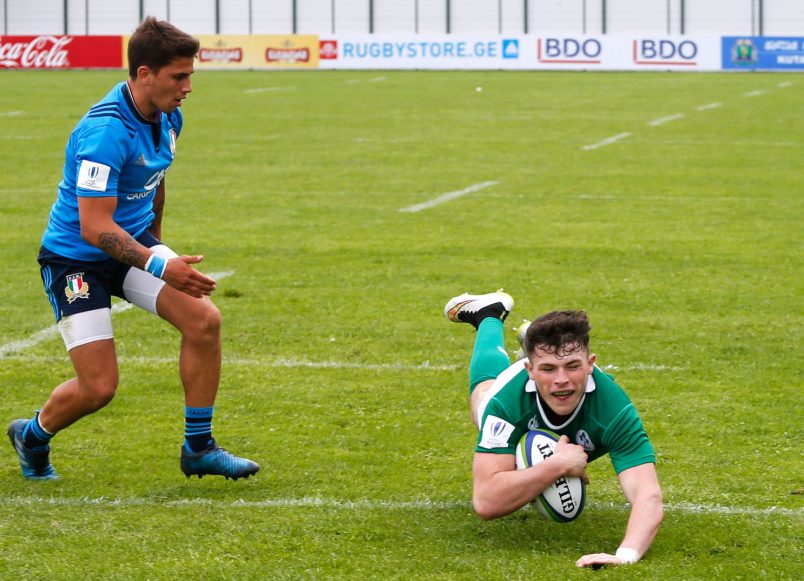 An injury stricken Ireland U20 side endured a tough day at the office in their World Rugby U20 Pool B opener, where a slow start would ultimately see them lose to Italy 22-21, their first loss to the Italians in 13 games.

The Italian forward duo of Danilo Fischetti and Jacopo Bianchi both crossed for tries before Conor Dean eventually got Ireland off the mark with almost half an hour played, but it would be the second half before Peter Malone’s charges fully got a foothold in this game.

Once they did, Munster’s Calvin Nash was an ever present threat for Ireland and the Academy winger was on hand for a brace, finishing off two moves from right to left with Dean adding one conversion to draw the sides level.

Shoring up defensively from there, Italy then forced Dean into two missed dropgoals but Ireland’s relentless pressure was rewarded with a six-point buffer thanks to two penalties, one of which was a long ranger from Ciaran Frawley.

But the Alessandro Troncon’s men rallied when it mattered most, Marco Zanon cutting through the green defensive line before finding Massimo Cioffi for the Italian’s third.   Cioffi also did extremely well in adding the touchline conversion for what would be the winning of the game.

For all that, Ireland did have the winning of the game in their own hands, but Frawley was unable to land his second penalty of the game late on.

With Scotland – this Sunday – and New Zealand still on the horizon in Pool B, the emerging Irish charges will take some harsh learnings from today’s defeat.

Ireland captain Paul Boyle commented, “We are devastated. Italy are a good, physical side and our first half performance wasn’t up to scratch. Our ‘D’ wasn’t great and we didn’t get our attack shape right. We came back a bit in the second half but fell short in the end. We know we can do it, we’ll just have to sharpen up in training.”