Setting The Scene For Saturday Showdown 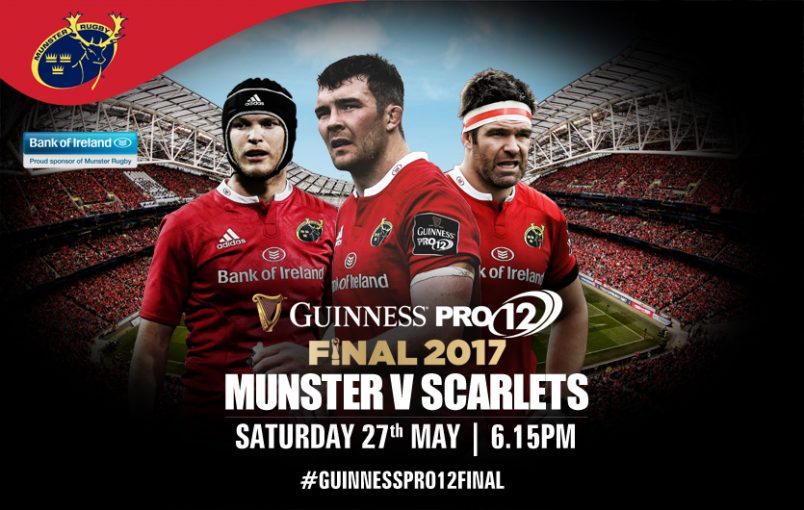 If recent form is anything to go by, this Saturday’s encounter at the Aviva Stadium makes for enticing viewing as Munster face Scarlets in the 2017 Guinness PRO12 Final.

Expect this one to be played on a knife edge.  The Munstermen have won their last seven PRO12 matches, ironically their last defeat coming against Scarlets at Thomond Park in round 16, while the Welsh side have won their last six encounters, their only Championship defeat of 2017 coming on a visit to Leinster in round 17 – a result they avenged gleefully on Friday night.

As is not so often the norm, both sides recorded away wins in the regular season head-to-heads, but the hugely competitive and tense nature of a Munster v Scarlets clash extends long beyond this season. In their last dozen games the honours could not be more evenly split with five wins apiece and two draws.

Starting slowly – three straight losses – as a flurry of astute new signings took time to find their feet, Scarlets have progressively grown into this season’s competition, peaking at the opportune time, and last weekend’s drubbing of Leinster won’t have come as any surprise to those closely following the form guide of late.

Since their last defeat, Wayne Pivac’s men have conceded an average of just 12 points and, clinically, scored an average of 4.5 tries per game, while across 22 rounds of regular season rugby, Scarlets were second only to Munster in terms of best defensive record.

Munster’s steadfastness in defence was very much on show at Thomond Park on Saturday where they limited Ospreys to a mere three points, bettering their unequalled season’s average of 14 points per game.  What’s more, so often this campaign, Munster have turned defence into attack, scoring 77 regular season tries – 21 more than last season – and entering the knock out stages as the PRO12’s top seeds with a tournament record 86 matchday points.

The quality of the two teams on the pitch this weekend is underscored by the number of their British and Irish Lions who will travel to New Zealand this summer – Munstermen Peter O’Mahony, Conor Murray and CJ Stander soon to become contemporaries of Scarlets’ Jonathan Davies, Liam Williams and Ken Owens, although the latter misses Saturday’s proceedings due to injury.

Last weekend’s outing at the RDS is one that will live long in the memory of Scarlets – their first win in Dublin in ten years, becoming the first away side to win a PRO12 semi final, and doing so with just 14 men after the electrifying Steffan Evans saw red for an alleged dangerous tackle on Garry Ringrose.

On the evidence of Friday night alone, the return of Davies from Clermont and the recruitment of Cardiff’s Rhys Patchell, Crusaders’ Johnny McNicholl and Leinster’s Tadhg Bernie, to name a few, were shrewd bits of business, while the raw talent of Evans and James Davies was clear for all to see.

Prior to seeing red, Evans was rampant in both attack and defence, scoring one minute, last-ditch tackling the next, and drawing the man expertly for Gareth Davies to run in Scarlets’ second try.  And, having had his red card subsequently overturned, the 22-year-old will be poised and hungry for more come Saturday.

Davies, younger brother of Jonathan, reigned supreme with a man-of-the-match performance in Dublin, and has the potential to use the strength, gas and nous that netted him an Olympic silver medal with GB7s to deadly effect against Rassie Erasmus’ men.

The Munster Director of Rugby met with media this week in previewing the game.

“I think we play very similarly. Scarlets, I think, have the second most runs in the competition and employ a lot of kicking. They changed it from the first few games they played. Tactically they are a well-coached team and you can see they’re on a run of unbelievable results.

“After they beat us here, they went and got a good smack off Leinster. Then they go and beat Leinster with 14 men. They’ve changed their tactics through the season.

“We’ll stick to our guns. We only know one way to play which has worked for us. If we want to change, we’ll have to do some stuff in the preseason.”

With captain Owens set to miss the Final also, John Barclay is the likely candidate to lead Scarlets again this weekend in what will be somewhat uncharted waters for the Scotsman.

“I’ve not played in a final before, I don’t think many guys in the team have. I believe that this is a big club; the history of the place, the position of the place kind of dictates that. I knew that when I came here, it’s really pleasing that we’re in the final and I really feel that we deserve to be at top table but now it’s about winning and delivering and staying up there.

“The crowd is pretty loud at the Aviva. It’ll be interesting to see how the support goes on the weekend. It’s nice to silence the home crowd as the away team. The Scarlets fans and the noise they made was just fantastic on the weekend.

“We probably go in as the underdog, if I was going to the game as a neutral I’d support the underdog so you’d hope we’d pick up a few fans along the way too!”

Too close to call, at least history will favour the province heading into Saturday’s showdown – four of the last six winners have all been regular season table toppers.

Video: Road To The PRO12 Final