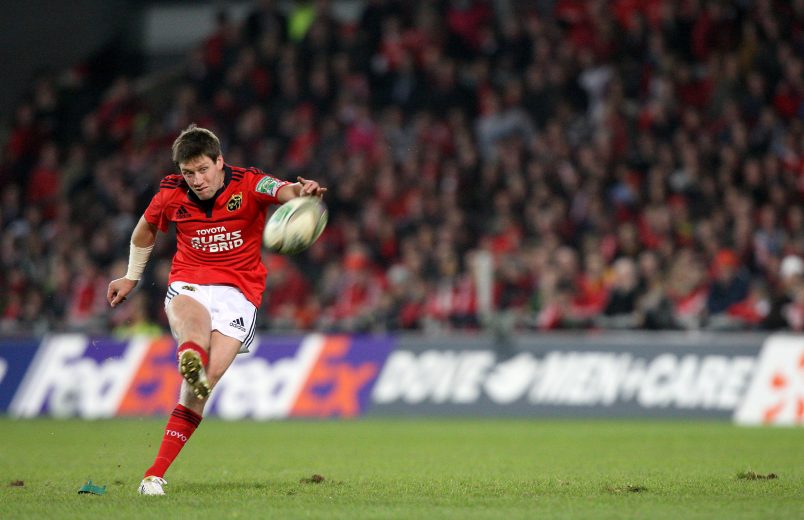 As he did with huge success for so many years, Ronan O'Gara kicks a penalty. ©INPHO/Ryan Byrne

Former Munster, Ireland and Lions out half, Ronan O’Gara, was today awarded the Freedom of Cork City during a special meeting of City Council in City Hall.

Hundreds were in attendance as the highest civic honour of the city was bestowed upon the Bishopstown local who now joins an illustrious List of Freemen including Roy Keane, Sonia O’Sullivan, Michael D Higgins, Adi Roche and former US President John F Kennedy.

In a professional playing career that spanned an incredible 17 years, the playmaker became Munster’s most decorated player.  Winning the first of his 240 Munster caps in August 1997, he steered Munster to Irish Interprovincial, Celtic League, Celtic Cup, Magners League and two Heineken Cup titles in which time he scored a record 2,625 points in red, including 1,365 Heineken Cup points to become the all-time leading points scorer of competition, a feat unlikely to be surpassed.

On the international front the Corkman was capped 128 times by Ireland – where he also remains the leading points scorer of the 6 Nations – toured with the British and Irish Lions on three occasions, and will be forever remembered for his sublime last minute drop-goal against Wales, securing Ireland’s first Grand Slam victory in 61 years.

“Pure Cork” and “utterly determined” were just some of the superlatives used by Lord Mayor of Cork Councillor Des Cahill to describe the playmaker, also adding, “it is fitting that the city honour O’Gara in this way for his immense contribution to rugby at all levels over the past 25 years.”

O’Gara himself said, “City Council, for me, reflect the people of Cork and to receive this award is extremely humbling for me and my family.  I was blessed to represent Munster, Ireland, the Lions and the people of Cork.

“I can assure you this is a day my family and I will never forget.”