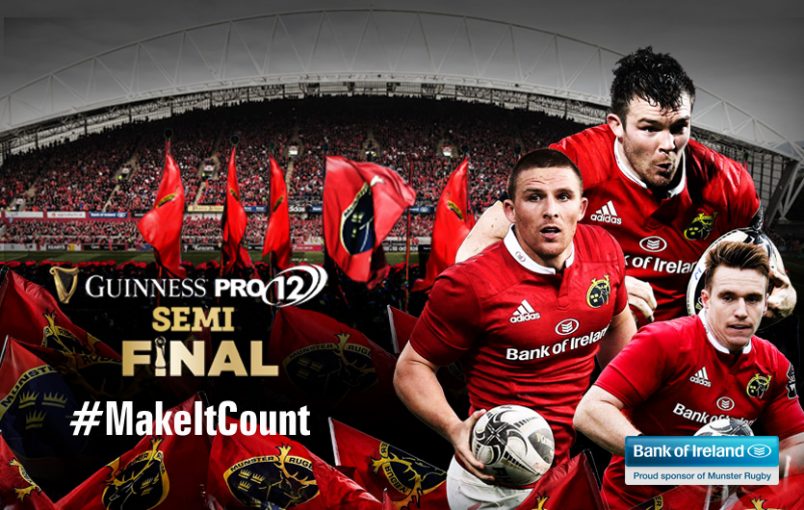 With a home Guinness PRO12 semi final now secured, #MakeItCount by showing your support for Munster when they welcome Ospreys to Thomond Park on Saturday May 20 at 6.15pm.

Every voice will count as Munster look to repeat the exploits of 2015 where they overcame the Welshmen to progress to the final at the Kingspan Stadium.  Ultimately that year Glasgow Warriors proved too strong in Belfast, and Rassie Erasmus’ charges face a considerable challenge if they are to make it to their second final in three seasons.

Backed by vocal home support each time, in the Championship’s history, no host side has ever lost a PRO12 semi final.  However, that statistic was very nearly overturned in the aforesaid tie.  Josh Matavesi looked to have rewritten the history books by crossing at the death, only for referee Nigel Owens to call play back for an earlier knock on, and Munster lived to fight another day.

Despite recent defeats to Scarlets, Cardiff, Leinster and Treviso, Ospreys’ strong run of form mid-season was enough to keep them in the upper echelons of the PRO12 standings, and a crucial and comprehensive defeat of Ulster in round 22 reaffirmed their position as title contenders.

Recently named as 2017 British and Irish Lions, Alun Wyn Jones, Justin Tipuric, Rhys Webb and Dan Biggar all featured in the semi-final defeat of 2015 and would love nothing more than to return the favour on May 20 and send Ospreys to their first final since claiming the title in 2012.

Captaining Munster to a 50-14 victory over Connacht on Saturday, Billy Holland gave his thoughts on Munster’s semi final opposition.

“We played them in Paulie’s (O’Connell) last game in Thomond Park a couple of years ago and I think we were something like 14 points up with 15 minutes to go and they had a disallowed try at the end of the game which would have won it for them if it stood.  They are a really dangerous team and they will feel like they have nothing to lose coming over here.

“They will take confidence because they have beaten us over here previously. Whoever you play in a semi-final, like the way we played Saracens in Europe, semi-finals are a different type of game. You play the best teams and you have to be on form on the day.”

Saturday’s bonus point win in Limerick, coupled with Leinster’s loss in Ulster, sees Munster enter the play-offs as top seeds.  Now, lets #MakeItCount, be there to cheer on Munster in Thomond Park on Saturday May 20 at 6.15pm.

Last Chance To Vote For European Player Of The Year