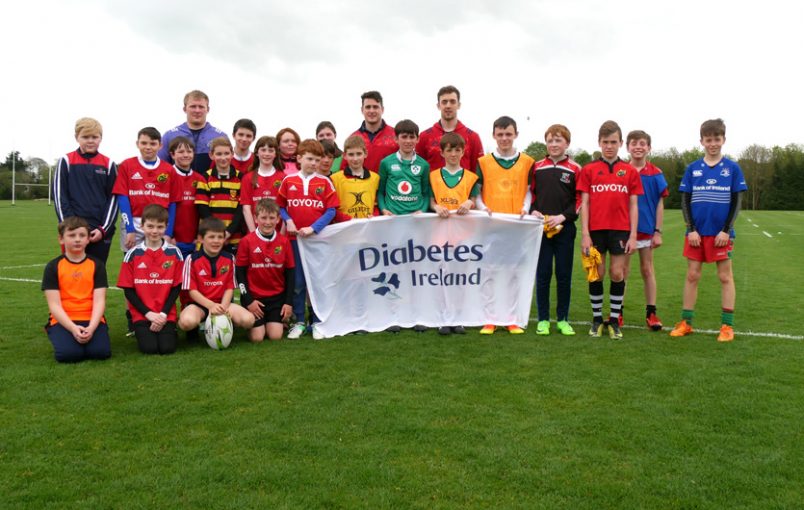 In support of Diabetes Ireland, another of our nominated charities for the current season, Munster Rugby were delighted to host members of the Diabetes Ireland Kidz Club for a training session in UL with some of their Munster heroes.

Ronan O’Mahony, John Ryan and Darren Sweetnam joined Rugby Development Officers Kenneth McNamara and Matt Brown in welcoming the kids, all of whom are type-1 diabetes sufferers, to the training fields at UL where everyone enjoyed fun drills and played a game of touch rugby after which the players signed autographs, posed for selfies and took part in a Q&A session.

In addition to last week’s event, Diabetes Ireland along with the Alzheimer Society of Ireland each received a share of match programme proceeds from the Munster v Leinster game in December, were guests of Munster’s corporate hospitality for Leinster and Scarlets, while all proceeds from tomorrow’s Munster Rugby Awards will also go towards both nominated charities.

Speaking at last week’s training session, Gary Brady, Diabetes Ireland Fundraising Manager commented, “Many years ago, type-1 diabetes would have been seen as something that would have inhibited their life across all different aspects of it, whereas now with the advancements in medical care it’s not a hindrance to their ability across aspects of life nor in a particular sport.  From what I can see they are having a great day out there and there’s none of them slowing down.”

On the charity’s season-long involvement with Munster Rugby, Brady added, “It’s been great for us this year both among the Munster Rugby community and supporters in terms of getting our key messages, risk factors and signs and symptoms out, but also in terms of how we can reward our own volunteers, branches and kids members.  We were at a match recently where we were able to bring some of our key volunteers from the Munster area.”