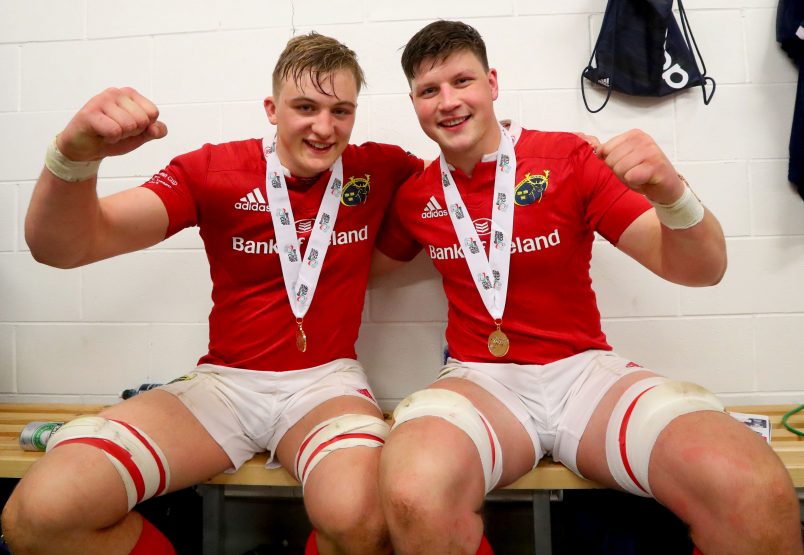 “Coming from 18-0 down was a very exciting way to win a Cup final and while I don’t think we’d like to make a habit of going so far behind, the lads showed great resolve to come back and get the result.  As is the nature of the competition, preparation was limited so it was a massive achievement from a group of guys who only got to train together on match week and mainly in the second half of the week.

“As there is such strength in depth across the senior squad at the moment, we had a core of senior and academy players available to play and that helped with consistency across the campaign.  In addition to this, we had a number of sub-academy and club players who featured mainly in the pool stages, Alan Tynan of Young Munster for example, and experience at this level will be of particular benefit to those guys.

“Many of the lads involved in the B&I win of 2012 were lining out for Munster in the Champions Cup semi final last Saturday and have also gone on to play for Ireland.  Last Friday night will give guys confidence, but as much as the actual win, it’s about the experience of the whole campaign, playing against really physical English Championship sides and matching them.  That is the stepping stone between AIL and PRO12 rugby.

“It worth noting also the work of our S&C Department.  In the final for example, when we got the try and headed for the dressing room 18-7 down, the players felt that Jersey were beginning to struggle whereas we felt fresh and as if we were only getting going.  There’s a lot of belief that we are in really good condition and can play right till the end – that came to the fore especially against Ealing and Jersey.”  See B&I Cup final highlights below.

Munster A/Development to face Ireland U20 at Thomond Park, Saturday May 13 at 1.30pm…

“This fixture has been running for the past few seasons and Ireland use it as part of their warm up to the World Rugby U20 Championship which this year takes place in Georgia, plus it’s a final chance for guys to put their hands up for selection.  Ireland will play two games, one against us and one against a Leinster selection with each player in contention playing for Ireland or their province, or both, across the two games.  Invariably, someone from outside the perceived group will win selection for Georgia.”

“There’s a bit of fun in the academy and sub-academy at the moment with the UL Bohs and Garryowen lads going head to head for the 1A spot next season while we also have a strong contingent involved with Cork Con who have had another excellent season and are preparing to contest both the Bateman Cup final against Old Belvedere this Saturday and the AIL 1A final against Contarf the following weekend.  We hope all the lads go well, and much like the B&I Cup final, the lads will gain valuable experience in pressure games such as these.”

“The National 7s Programme has been scaled up since last season and Ireland will compete in a European Grand Prix competition where they hope to progress to a qualifier for the World Series.  Ireland 7s are getting to a level where they want to be and from our perspective Steven McMahon, Ned Hodson, Greg O’Shea and Shane Daly have been in the squad regularly so hopefully they will see further involvement over the summer months.”

“Following on from a lot of cookery lessons in Hook and Ladder restaurant in Limerick, our nutritionist Gavin Rackard tasked the lads with practicing their skills in the High Performance Centre kitchen through a Cook-Off.  Teams were formed and each week, under the watchful eye of Gavin, they shopped for good quality ingredients, came up with recipes and cooked a meal after which they were scored.

“Cooking well, and the planning that goes with it, can be challenging for some guys, but this approach brings a lot of fun, ensures that everyone does their fair share, and capitalises on their competitive nature.”

Results from Weeks 1, 2 & 3 from the @GreencoreGroup @Munsterrugby Academy Cook Off. Excellent standard so far – plenty more to come! pic.twitter.com/ccIviglWNI

“John Foley is currently rehabbing a shoulder injury but we remain hopeful he will see action before the end of the season and be in contention for the World Rugby U20 Championship.

“Bill Johnston has made great progress with his ankle injury, and having completed his post-op recovery, is now after commencing his rehabilitation programme.

“Ben Kilkenny continues his longer-term rehab for both shoulder and ankle injuries.”