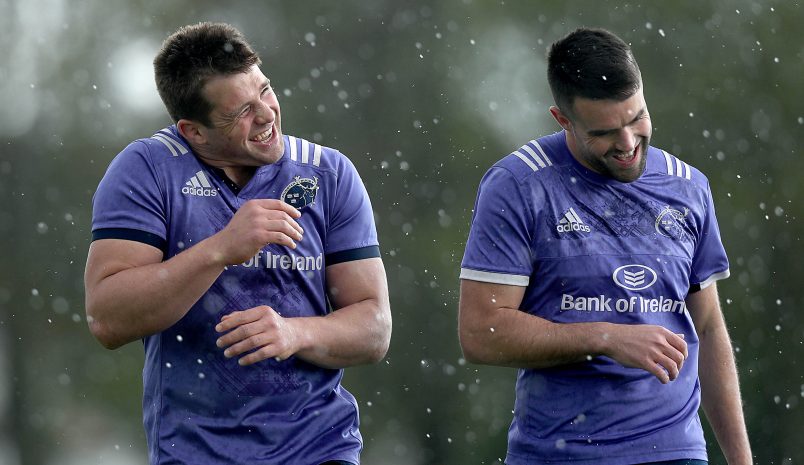 CJ Stander and Conor Murray had a 'hail' of a time at training yesterday! ©INPHO/Donall Farmer

With the focus now switching to the business end of the Guinness PRO12, Munster took to the training field in UL yesterday in preparation for Saturday’s round 21 encounter away to Treviso.

Munster Director of Rugby Rassie Erasmus met with media following yesterday’s session where the reflected on his side’s 26-10 Champions Cup semi final exit to Saracens, the defending champions deserved winners on the day.  However Erasmus draws solace from the fact that, in comparison to Saracens, his charges are just at the beginning of a new European dawn to which they have made a more than encouraging start.

“Yes we are very disappointed but if you sit around and feel sorry for yourself then nothing will change, you must get back on the horse and try to get better.

“We were beaten by a team who, if they were to play us ten times, would probably beat us eight times based on where we have grown to so far.  Now we need to get past it, learn from it and start our next challenge of reaching that level.

“They (Saracens) are without doubt the best team we have played this season, not just tactically, but it’s the intensity that they can bring.  There doesn’t seem to be a facet of their game where they don’t have massive intensity.  You can really see they are a squad that has been developed over a number of years and they have learnt lessons losing quarters and semis, then winning here, winning there, and I think they have grown into one of the best club sides in the world.  Hopefully we can do the same.”

With a PRO12 title – their first since 2011 – to play for in the coming weeks, focus and motivation won’t be hard to come by as the squad return to Domestic action, and with a PRO12 semi final spot already secured, the province head to Treviso this weekend in the knowledge that a win would see them line out at Thomond Park on May 20.

“We are coming into the crucial matches and ourselves and Leinster had an extra game with the Champions Cup final so that makes it slightly trickier when it comes to managing players and keeping them fresh.  We have two games, then a weekend off and then a semi final.

“We’ve are heading to Treviso at a time when they have hit some excellent form, defeating some big sides like Ospreys and Edinburgh and running other sides very close.  Also, they have a lot of the Italian side that defeated the Springboks, and it’s only a few years since they defeated us (2013), so it will be a tough grind.

“We will rest and rotate a few guys this week which always takes some continuity out of the team so hopefully we will get over that quickly.  Then we play Connacht who as we all know have been a real bogey team for Munster.  It’s not going to be an easy run-in.”

Erasmus is under no illusions as to the importance of home advantage on May 20, especially as no away side has ever won at the semi final stage of the PRO12.

“It’s the first time I’ve come across a stat like that in a competition, it’s unbelievable.  Obviously we’ll do our very best to get it but Scarlets will have other ideas.  That said, our destiny is in our own hands and it’s up to us to get the result we need.”

Munster Development To Play Ireland U20