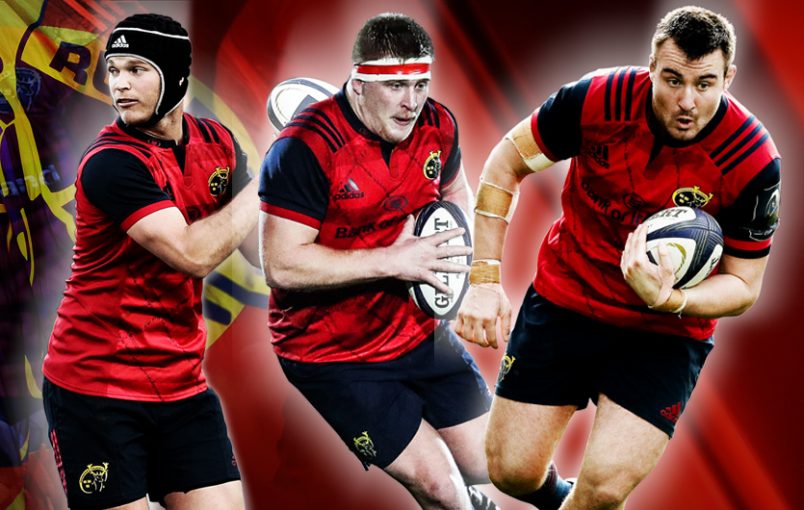 The 2017 Munster Rugby Awards, in association with the Irish Independent, will take place on Thursday May 4th at the Maryborough Hotel in Cork and the nominations for Senior Player and Academy Player of the Year have now been finalised.

The Munster Rugby Senior Player of the Year nominees are Tyler Bleyendaal, John Ryan and Niall Scannell, all of whom were nominated by their fellow team-mates.

Once again the overall winner will be decided by a public vote. Click here to vote via the Irish Independent website and be in with a chance to win two tickets to next month’s prestigious awards ceremony.

Greencore Munster Rugby Academy players Dan Goggin, Conor Oliver and Brian Scott have been nominated for the John McCarthy Award for Academy Player of the Year.

In total, eleven diverse categories will be honoured in celebrating the best of Domestic and Professional rugby within the province.

Player of the Year Nominees:

Tyler Bleyendaal: The New Zealander has firmly announced himself as one of Europe’s top out halves this season.  With a cool temperament and great time on the ball, the 26 year old was instrumental in Munster making this season’s Champions Cup and PRO12 semi finals.  Off the tee and out of hand, Bleyendaal’s kicking and control has been close to exemplary while his ability to marshal backs and forwards around the field has facilitated excellent team performances from the men in red.  Captaining Munster in four of 23 appearances this season, and with four Man of the Match awards, the playmaker is one of the forerunners for the PRO12 Golden Boot and was one of three Munster players nominated for European Player of the Year alongside Conor Murray and CJ Stander.

John Ryan: Increasing his involvement with every season, the Cork native has made the number 3 jersey very much his own across 2016/17, starting no less than 20 of 22 appearances.  At 119kg and also capable of covering loosehead, Munster’s impressiveness in the scrum this season is due in no small part to the work of Ryan, while his work rate and bruising tackle count around the park was best illustrated in Munster’s Champions Cup quarter final win over Toulouse where he scored the first try and picked up the Man of the Match accolade, his second of the season. The 28 year old’s achievements at provincial level led to an Irish call up, winning his first cap against Canada in November before featuring in every game of the 2017 Six Nations.

Niall Scannell: Another key component of the Munster pack and set-piece, the hooker has gone from 10 starts last season to 20 for the season to date with a further three appearances off the bench and won his 50th cap against Toulouse at the beginning of the month.  A former Ireland U20 captain and a leading voice among the tight-five, Scannell’s accuracy at the line out has helped make Munster’s driving maul a potent weapon off of which he himself has touched down for four tries, including against the Maori All Blacks in November.  Solid at scrum time, mobile and abrasive in open play, the 25 year old was another rewarded with his first international cap this season, starting Ireland’s Six Nations win over Italy and also featuring against France, Wales and England.

There will also be a raffle of Munster Rugby prizes on the day with all proceeds going to The Alzheimer Society of Ireland and Diabetes Ireland.