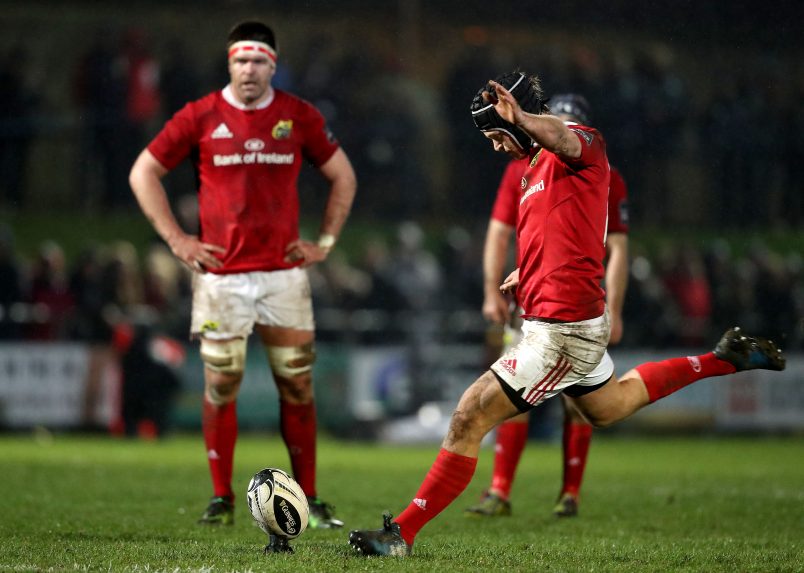 As the fifth ‘BIG WEEKEND’ of the Guinness PRO12 season approaches in Round 20, Munster’s own Tyler Bleyendaal leads the pack in the race for the Rhino Golden Boot.

A concussion sustained in last weekend’s win over Glasgow Warriors could see Bleyendaal miss Saturday’s encounter with Ulster in Thomond Park at 3pm, while his two of his closest competitors – Sam Davies of Ospreys and Dan Jones of Scarlets – are in action at Judgement Day V at the Principality Stadium as they face their regional rivals Cardiff Blues and Newport-Gwent Dragons.

Glasgow Warriors’ Finn Russell is tied with Jones while just a fraction behind them is Leinster Rugby’s Isa Nacewa. Russell will try to improve his success rate against Zebre Rugby on Friday night while Nacewa will lead his team into the Sportsground against Connacht Rugby in Galway where the home team will be eager to mark John Muldoon’s 300th appearance with a win.

To qualify for the Rhino Golden Boot players must attempt a minimum of 30 place kicks at goal and the player with the highest kick percentage will be crowned as the winner after Round 22.

Bank of Ireland To Lineout With Munster Until 2023