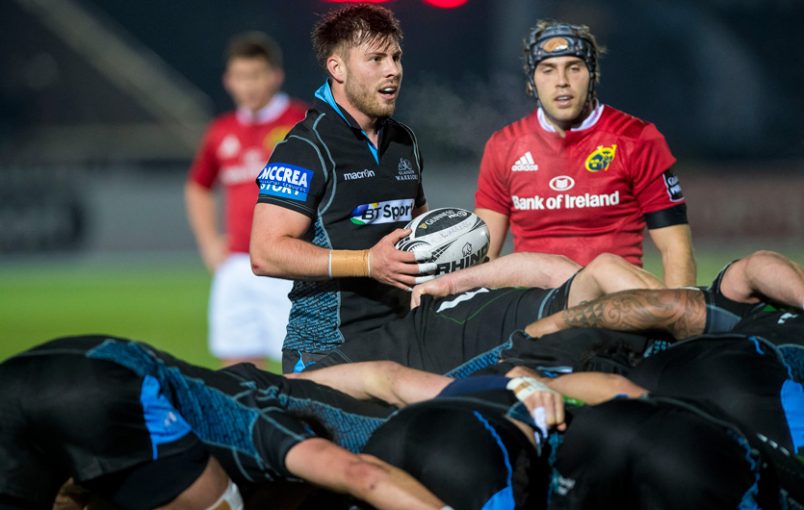 In what’s shaping up to be one of the ties of the weekend, Munster host familiar foes Glasgow Warriors on Saturday night with neither side wanting to miss out on vital Championship points as the title race hots up.

Second meets sixth in what will be Munster’s final PRO12 outing in Irish Independent Park this season, a venue where the province have recorded one loss and two wins this campaign – suffering defeat to Cardiff in the first home game of the season before bouncing back on Leeside with comprehensive bonus point wins over Ospreys and Dragons.

Since the competition’s inception, Munster and Glasgow have played each other 29 times, Munster taking the spoils 17 times and Glasgow 11, with the sides playing out just one draw.  However, the six most recent encounters make for much closer reading, three wins apiece, one of which clinched the 2015 title for a resurgent Glasgow under Gregor Townsend.  What’s more, in their last three encounters, no more than three points separated the sides each time.

However, it’s results across all competitions to date this season that won’t please Warriors.  Factor in Munster’s Champions Cup wins and the province are looking to make it four wins on the bounce over the Scotsmen who, as a result, will have more than ample motivation against the men in red this weekend.

Paying a price somewhat for strong representation in the Scottish national side, Glasgow lost all bar one of their PRO12 encounters during the 6 Nations window, and following last weekend’s Champions Cup exit to Saracens, expect a locked and loaded Warriors outfit – including the likes of Stuart Hogg, Finn Russell and Jonny Gray – to travel to Cork.

Warriors will target nothing short of four points at the very least as they look to better sixth on the table and contend for silverware come the play offs.  And it looks as if they have found their rhythm in timely fashion, recording bonus point wins over Dragons and reigning champions Connacht in rounds 17 and 18.

Meanwhile, off the back of Saturday’s Thomond Park heroics, Munster will carry strong momentum into this weekend’s clash as they look to consolidate or better second in the PRO12 standings.  Depending on the outcome of Ospreys and Leinster earlier in the day, Munster could go top – Rassie Erasmus’ men are just two points adrift of leaders Leinster and two ahead of Ospreys in third but also know that dropping points so late in the season could prove detrimental to chances of a home semi final.

Either way, expect nothing short of an epic battle as Warriors look to wage war on Munster in Irish Independent Park.

This game is now SOLD OUT, Munster’s 9th sell out of the season.  Tickets will not be available at the ground tomorrow night with the ticket booth at the Dolphin gate open for ticket collections only.

Should you have an e-ticket, no need to print, you can use your smartphone to scan in on the day.

Please note that there is unreserved seating in the West Stand.