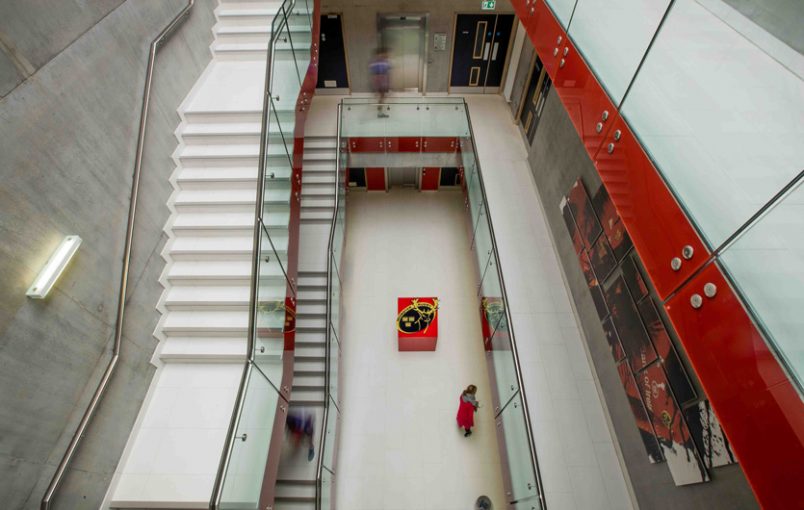 A view of the atrium in the High Performance Centre at UL. ©INPHO/Morgan Treacy

Munster Rugby’s new High Performance centre was today officially opened at the University of Limerick by Patrick O’Donovan TD, Minister of State for Tourism and Sport.

Part of an overall €15m project, the Centre was one of two new buildings to be opened today with Minister O’Donovan also cutting the ribbon on the new UL 25m Diving Pool.  Both buildings are adjacent to and connected with the existing UL Sport Arena.

Meanwhile, the High Performance Centre, the province’s sole training base as of this season, has also been nominated for Building Project of the Year at the Irish Building & Design Awards 2017 – the industry’s most prestigious recognition of excellence in the building and design sectors.

Acknowledging the best in all areas of construction and design, awards will be going to the finest and most innovative projects, firms & practices over the past 12 to 24 months. The awards will be announced at a black-tie gala night being held in Dublin on April 7th.

The overall winner is decided by public vote with the Centre nominated alongside the restoration and conservation of Kilmainham Courthouse, Mercers Institute for Successful Ageing at St. James’s Hospital and the Vertium office development in Dublin.  Click here to cast your vote.