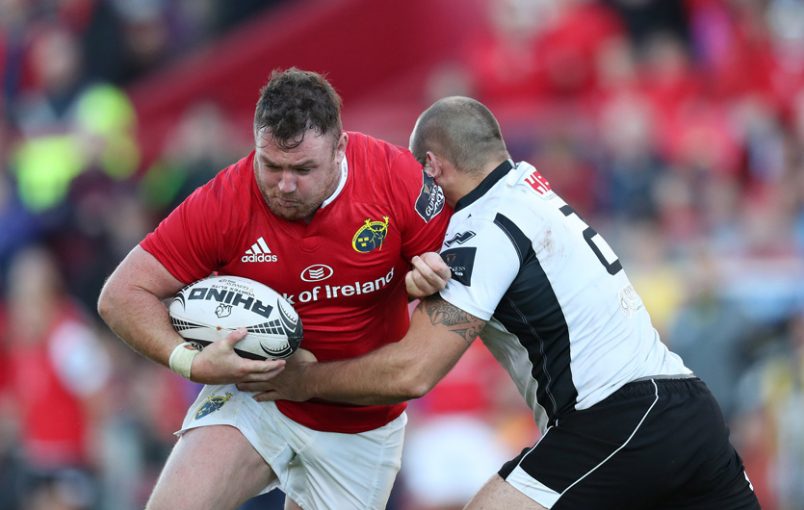 Dave Kilcoyne on the attack against Zebre at Thomond Park earlier this season. ©INPHO/Billy Stickland

With just five rounds remaining in the regular PRO12 calendar, the focus is firmly on the business end of the season as each side chases valuable points in the race for play-off and Champions Cup qualification.

Most coveted of all is a top-two finish, especially given the competition’s history where no away side has ever won a semi final.  Currently, Munster find themselves among the forerunners for such home advantage – alongside Ospreys and interprovincial rivals Leinster – but know that a single slip up between now and the start of May could prove detrimental to their play-off ambitions, whatever about bringing a semi final to Thomond Park.

Dependent on results, Ospreys, Leinster and Munster all have the potential to finish out this weekend at the summit of the PRO12 table.  As little as three Championship points separate the sides with leaders Ospreys away to Treviso, second placed Leinster hosting Cardiff Blues and Rassie Erasmus’ men also travelling to Italy where they face Zebre in Parma at 3pm (2pm Irish).

Munster’s away record in the PRO12 this season is an impressive won eight and lost one. With regards to Zebre, the sides have met on nine previous occasions with Muster victorious in every instance, seven times with a try bonus point.  Last time out, at Thomond Park, the men in red handed the Italians a 49-5 drubbing.

Even with such a strong record, any notion that this encounter is a mere formality for the province would be foolhardy.  As recently as last season in Parma, despite Mark Chisholm’s early try and 11 points from the boot of Ian Keatley, a spirited Zebre pushed them all the way, Munster just shading it on a 12-16 scoreline.

As it’s not just Munster that they’ve run close of late, as Rassie Erasmus explained when meeting with media yesterday, “They (Zebre) have the ability challenge you, especially at home like they did to Wasps for much of their Champions Cup game.  They also put Connacht on the back foot this season.  If you are in any way off your game they can surprise you.  Last year for example, we beat them by just 4 points in Parma.

“It’s hard not to talk about Toulouse because that game is less than fourteen days away, but we cannot look past this Zebre game. Ten of their guys played in Scotland last weekend and they will be at Test match level.  Plus they played a game the weekend before last. Us on the other hand will be playing on the back of two free weekend’s with some guys coming in, some guys coming out, and some guys like Tyler (Bleyendaal) who haven’t played for a while.

“Our challenge is to go away from home, beat a PRO12 team to stay in the hunt for the semi-finals and not take our eye off the ball.  Next week is the Toulouse game and that’s important but so too is the Zebre game.”

Weather permitting, as fast and expansive game is one that Munster would relish, especially given the potency of some of their backs this season.  High on the watch-list for Zebre will be half backs Duncan Williams and Tyler Bleyendaal, and back three flyers Ronan O’Mahony and Darren Sweetnam.

Williams and Bleyendaal are among the Championship’s top performers when it comes to try assists, O’Mahony is Munster’s leading try scorer of the current campaign (7), and Sweetnam spearheaded the Italians’ downfall in Thomond Park last October, scoring the game’s first try in a man of the match performance.

O’Mahony was another who met with media this week, “A lot of their players will be hurting coming off the back of the 6 Nations and it would be stupid and unwise to go into this game with our eyes set on Toulouse.  Last time over there it took a late drop-goal to give us a little more breathing room.  They love to run it from anywhere and that will keep us on our toes.

“On the other side of it, for some lads this is their last chance to show Rassie what they’ve got before Toulouse next weekend. Plus, only five rounds remain in the PRO12 so every point we can pick up is vital.”