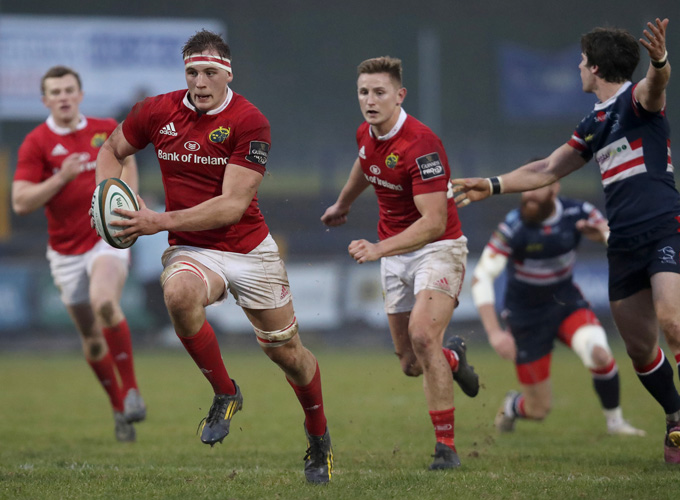 With Munster A’s British and Irish Cup quarter final against Ulster A at Irish Independent Park just around the corner (Sunday March 12 at 3pm), we look back at their campaign to date, one that has seen the province qualify for the knock out stages as the competition’s top seeds.

A baptism of fire for Malone's young charges in Pool 1 saw them suffer a 15-30 defeat to reigning champions London Welsh at Midleton RFC in October, however this result would later be expunged after the English Championship outfit went into liquidation and were subsequently disqualified from the competition.

Given the impact of this on the other clubs in Pool 2 and potentially other clubs in the competition, especially in terms of the final standings, the B&I Cup Organising Committee agreed that the calculation for play-off seedings would instead be decided on a pro rata basis by taking into account competition points against matches played.

London Welsh would be the Munstermen's one and only defeat and they picked up 19 of a potential 20 points in their remaining four pool encounters, hence topping the seedings with an average Points Per Game of 4.75. Their quarter final opponents, Pool 1 runners up Ulster A, secured the final play-off berth with a PPG of 3.33.

Leading 10-21 at half time through a Te Aihe Toma try, a James Cronin brace and pinpoint conversions from the boot of academy playmaker Bill Johnston, the province responded to Rotherham’s second half comeback with another brace, this time from academy hooker Vincent O'Brien after excellent work at maul time.

The return encounter a week later also saw Munster A cross the whitewash on five occasions. Peter McCabe and Sam Arnold dotted down in the right corner and with Steve Crosbie adding a penalty, the hosts were fully in control at the interval, leading 15-3. Crosbie was one of three try scorers upon the resumption with academy duo Gavin Coombes and Rory Burke also crashing over in a 34-3 drubbing of the Englishmen.

Taking time to settle in this encounter, Munster A did well to concede just one try as Doncaster took command in the opening 20 minutes, Jarad Williams crossing for the opening try. Malone’s men began to boss proceedings approaching the interval with Coombes notching up his second try in as many games. Toma’s conversion made it 7-7 at the break. Captaining on the day, Robin Copeland bolstered Munster's ever growing momentum and confidence with a try on 42 minutes before Cian Bohane and academy centre Calvin Nash both picked off intercepts to ensure Munster A left Castle Park with a maximum return for their efforts. The result guaranteed them a quarter final spot.

The hosts headed to West Cork in the knowledge that a win would ensure a home quarter final. A scrappy affair in the early exchanges, early scores came by the way of penalties with Rotherham leading 6-3 before Munster found their rhythm and crossed for two unanswered tries through Stephen Fitzgerald and captain Bohane. A Doncaster penalty on 52 minutes made it a tense second half before Cork Constitution’s John Poland eventually made sure of victory with Munster A's third try on the 79th minute. The boot of Toma again played a pivotal role in proceedings, the kicker enjoying a 100% kicking record off the tee for the second consecutive game.

Tickets are now on sale while entry is FREE for all MRSC members and 10 Year ticket holders on production of membership cards or season tickets.