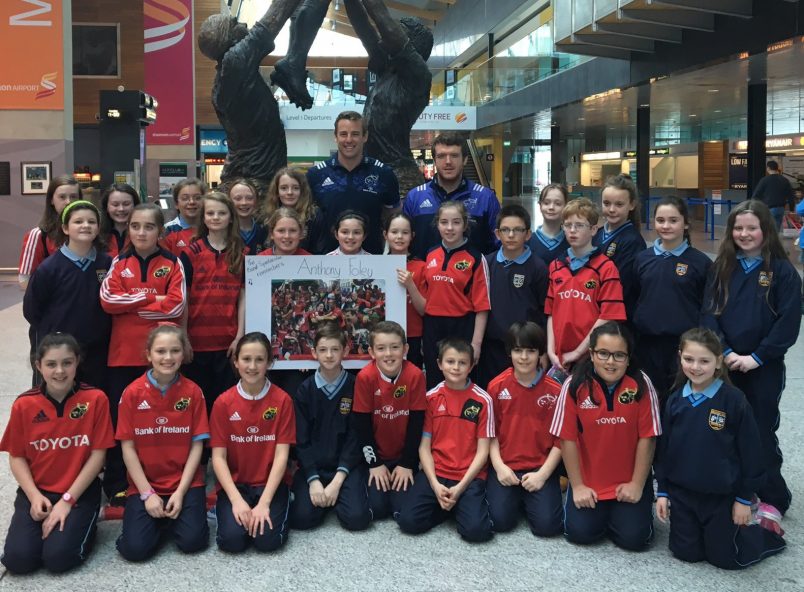 It’s been another busy couple of weeks with the Munster squad out and about in the province visitng and supporting a number of schools, charities and community initiatives.

Below are some of the moments captured along the way.

The school, who are currently participating in the IRFU Play Rugby programme, were holding a “Munster day” and arrived wearing their Munster jerseys. On their visit, the players answered questions on all things Munster and what it was like being a professional athlete.

Kilcolman NS is a feeder school to Estuary RFC who have recently benefited from schools coaching from Munster Community Rugby Officer Ken Imbusch.

Alex Wootton and Sam Arnold both enjoyed their visit to the Model School (An Mhódhscoil) in Limerick for a coaching session and Q&A with pupils from third to sixth class.

The senior pupils learned plenty from the Munster pair, with some excellent questions coming from the floor, and for their brilliant efforts the students received a nice surprise of tickets for Munster's upcoming game against Scarlets at Thomond Park on Friday.

Sam Arnold was again on hand to join Sean McCarthy at Cashel RFC for the recent U15 Emerging Schools Blitz.

Boys from Cashel Community college, Nenagh College, Nenagh CBS, St Ailbies, The Abbey and Coláiste Mhuire Co-Education school were all involved on the day displaying their talents to the Munster duo.

It was a fantastic day's rugby, and the boys were delighted to see some of Munster's first-team stars pay them a visit.

The development of rugby continued across the province with an Emerging Schools Blitz also held in Mahon recently.

Munster and Ireland internationals James Cronin and Billy Holland paid a visit to the youngsters who were in impressive form showing off their skills as sides from Deerpark CBS, Ballincollig Community School, SMGS Blarney and Crosshaven competed on the day.

With over 120 young musicians and band leaders from Ennis NS, Milford NS and Knockanean NS all taking part in The Band Spectacular at Shannon Airport Mark Chisholm and Mike Sherry were treated to a music extravaganza as the students held a musical tribute to Anthony Foley.

The players were on hand to show their support with a signed jersey from the squad and tickets to Munster's upcoming game against Scarlets. Chisholm and Sherry took part in all the revelry, addressing the musicians and audience, taking time to sign jerseys and brochures. It was noted that Mark Chisholm was eager to get the words of Cailín Álainn and Mike Sherry is ready to produce his tin whistle any day now!

The players aren't the only ones in demand as Director of Rugby Rassie Erasmus held two Q&A evenings in the last month. Erasmus was on hand for a Bank of Ireland customer experience evening at the High Performance Centre in UL, while later in the week the South African coach met with Supporters Club members at the exclusive MRSC event held in Irish Independent Park with over 120 members in attendance.

Full house for the MRSC Q&A with Rassie… Fascinating stuff so far! pic.twitter.com/mvDvEKtUHR

Thank you @Munsterrugby for kindly supporting our upcoming ball! pic.twitter.com/4fxOUG9POT