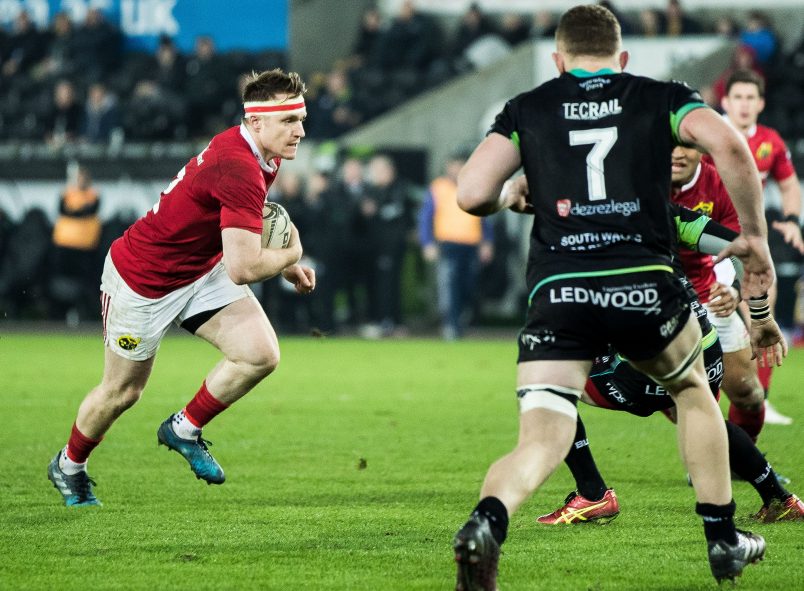 Find the latest squad update here as preparations commence for Scarlets in Thomond Park on Friday (7.35pm), while eleven players have been named in Ireland’s 34-man training squad for Ireland v France.

Following on from their involvement in Saturday’s Guinness PRO12 victory against Ospreys, Ian Keatley, Andrew Conway, John Ryan and Tommy O’Donnell all linked up with their international colleagues at Carton House on Sunday ahead of Ireland’s round three 6 Nations game against France next Saturday.

In UL the Munster squad will commence preparations for Friday night’s game against Scarlets with an indoor session this afternoon.

The medical team confirmed that Jack O’Donoghue and Rory Scannell both sustained knocks following Saturday evening's game, with respective ankle and knee bangs the young duo will sit out today’s session. O’Donoghue is expected to be available as the week continues while Scannell will continue to be monitored by the medical team but remains a doubt for this weekend.

Jaco Taute (shoulder) will take part in modified training with his progress reviewed as the week continues.

On the club front it was a good day for the three Munster sides in Division 1A.

Cian Bohane bagged a brace of tries as Young Munster edged out St. Mary's 20-18 in a cracking Division 1A contest at Tom Clifford Park.

At Dooradoyle Academy out-half Bill Johnston started for Garryowen as the Limerick side climbed back into the top half of the Division 1A table thanks to a gritty 17-16 victory over UCD.

The academy trio of Ned Hodson, Vincent O’Brien and Rory Burke all played their part in Cork Constitution’s 16-10 win away to Terenure, ending the Dublin based club’s three-match winning run.

While in Division 1B Duncan Casey continued to secure game-time after completing his recent knee rehabilitation. The hooker started his second successive game for Shannon in the hotly-contested Munster derby clash against Dolphin at Irish Independent Park. Academy player Stephen Fitzgerald was also involved but retired early due to a knee injury.

Finally Angus Lloyd lined out for UL Bohs as they suffered a home defeat against Buccaneers.

Guinness PRO12 rugby returns to Thomond Park on Friday February 24th with Scarlets in town for the round 16 fixture (7.35pm).