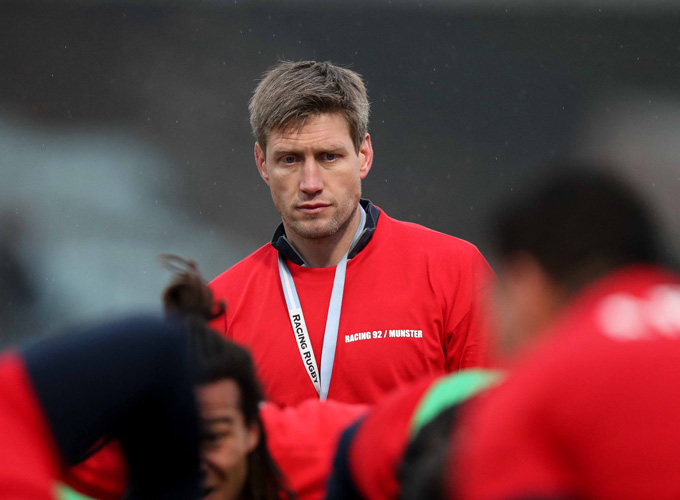 Munster welcome Racing 92 to Thomond Park this Saturday in the knowledge that a win will guarantee the hosts a home quarter final. Ronan O’Gara’s Racing will have other ambitions however as they look to replenish a lacklustre European campaign to date. KO 5.30pm.

The game will also mark Munster’s 60th top flight European game at Thomond Park, the first of which took place against Swansea in 1995 with Munster losing just four times at the Limerick venue across 22 European seasons – Leicester 2007, Ulster 2012, Clermont 2014 and Leicester 2015.

A lot can change in the course of a season as Racing know only too well. When the Champions Cup pool draws were made last June, Racing were ranked as a Tier 1 club after winning the 2015/16 Top 14 title and finishing out the European season as Champions Cup runners up. The draw also saw them tipped as favourites to top the Pool 1 standings.

Not to be however with the Parisian outfit slipping to four consecutive Champions Cup losses, two of which came at their traditional fortress of the Stade-Yves-du-Manoir against Glasgow and Munster. The latter defeat – Erasmus’ men handing them a 7-32 drubbing – was perhaps the straw that broke the camel’s back and a hurting Racing rediscovered form in a 34-3 demolition of Leicester Tigers last weekend, dumping the two-time champions out of the competition.

At the opposite end of the European spectrum this season are Munster whose 6th place finish in the PRO12 saw them seeded in Tier 4 and emerge from the draw as the proverbial underdogs of Pool 1. But the resurgent province has gone on to record four wins from five, pick up three try-bonus points and maintain the best defence in the competition in joining Leinster, Clermont and holders Saracens in the quarter finals with a round to spare.

In doing so, Munster have become the first side to reach the Champions Cup knock out stages for the 16th time.

Again, should all four clubs win their round 6 matches this weekend, they will be guaranteed home quarter-finals. For the quarter-finals, the pool winners will be ranked 1 to 5 and the best-placed runners-up ranked 6th, 7th and 8th by reference to the number of match points earned. Heading into this weekend, Munster are currently ranked third after Leinster and Clermont with Saracens in the fourth (full standings listed below).

The clubs ranked 1 to 4 will have home advantage in the quarter-finals as follows:

A bonus point win in which they kept Leicester try-less will have restored a certain amount of pride in the Racing jersey, but to become only the second French side in history to defeat Munster at Thomond Park would put an altogether different sheen to their European exploits for the season. Such winning momentum would also set them up nicely for a return to the Top 14 where they currently lie in 9th after 15 games.

If any side will have the inside track on Munster and what it’s like to play at a packed Thomond Park, it’s Racing. The iconic Limerick venue is very familiar territory to three men in particular – Julien Brugnaut, Casey Laulala and most famously Ronan O’Gara.

French international Brugnaut made 15 appearances in his one season with the province while former All Black Laulala won 51 caps from 2012 to 2014 and was selected in the 2014 PRO12 Dream Team.

Undoubtedly the warmest welcome will be reserved for O’Gara. From UCC to Cork Con, Munster to Ireland, the former playmaker is the embodiment of rugby in the province and, amongst copious other achievements, guided Munster to European Cup successes in 2006 and 2008. In what will be a day of mixed emotion for the Racing Assistant Coach, make no mistake, O’Gara’s competitiveness, professionalism and shrewd rugby brain will have Racing primed for a big performance.

From 1 to 15, players have stood up across the park for Munster this season. With five rounds played CJ Stander is still the competition’s top ball carrier (82) while he and his Ireland colleague Jamie Heaslip of Leinster are the only two players to have played the full-80 in each game.

Another back rower, squad captain Peter O’Mahony, has been Munster’s primary lineout target in the current campaign with no less than 28 takes – including steals – second only to, coincidentally, another Leinster and Ireland man, Devin Toner.

Scrum half Conor Murray continues to ooze ‘world-class’ in both defence and attack, and along with Connacht’s Jack Carty and Saracens’ Owen Farrell shares the spoils for the most try assists (5).

How they stand pre-Round 6