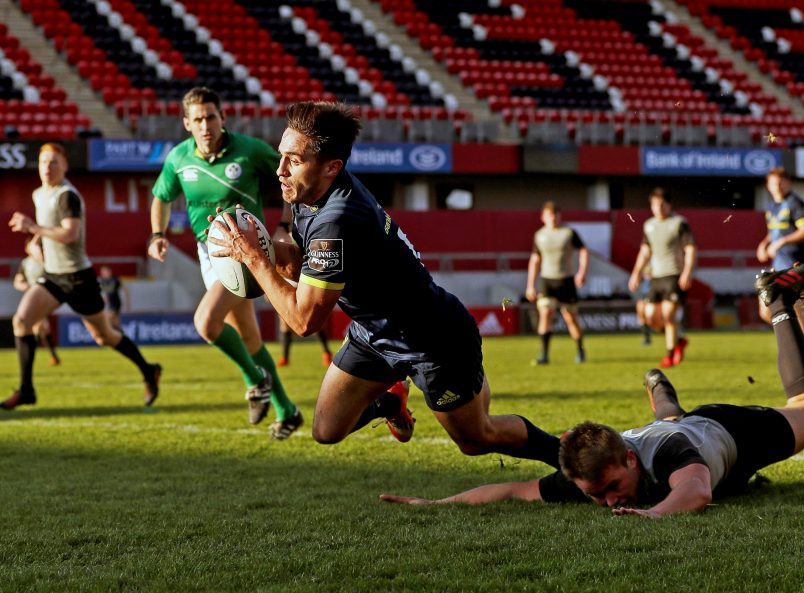 Thomond Park hosted the future stars of Irish Rugby this afternoon with the annual challenge game between Munster Development XV and Ireland U20 XV once again proving to be an entertaining contest.

With a view to using the challenge game as a window to the upcoming U20s 6 Nations both squads featured players from the wider Ireland U20 training panel.

With the hosts leading 28 nil at the interval the young Irish side fought their way back to score 21 points in the second forty to give a final score of 35-21.

Jordan Larmour, Caelan Dorris and Tommy O’Brien all crossed for the visitors with Conor Dean and Ciarán Frawley kicking conversions.

Following early pressure the first try came after three minutes with the Munster pack doing the hard work and using their driving maul to good effect with academy prop Rory Burke credited with the opening score.

The pressure continued and after a successful phase of continuity out wide Garryowen’s Bailey Faloon showed great pace on the outside to touch down in the corner. Conor Fitzgerald’s excellent touchline conversion extended the lead to 14 points after 17 minutes.

Advancing into the Irish 22 once again the Development side proved too strong with Munster’s John Madigan crashing over on the half-hour mark.

With Fitzgerald kicking for territory the home-side found themselves deep inside the opposition’s 22 in the final play of the opening forty. Greig Oliver’s side were fortunate to clean up messy lineout ball and hold on to possession before Union Hall man David McCarthy scored under the posts on the stroke of half-time.

On the resumption both teams looked for early territory but sustained pressure from Ireland was met by a resilient Munster defence to keep the visitors scoreless after 50 minutes.

However minutes later, it was winger Jordan Larmour who eventually broke the line for the visitors, with Conor Dean adding the conversion.

Munster’s final try came by way of a Fitzgerald chip over the Irish defence which was gathered and scored by Greg O’Shea to make it 35-7 after 60 minutes.

It was all green for the closing five minutes with the two final scores taken by Caelan Dorris and Tommy O’Brien, both converted by Ciarán Frawley.