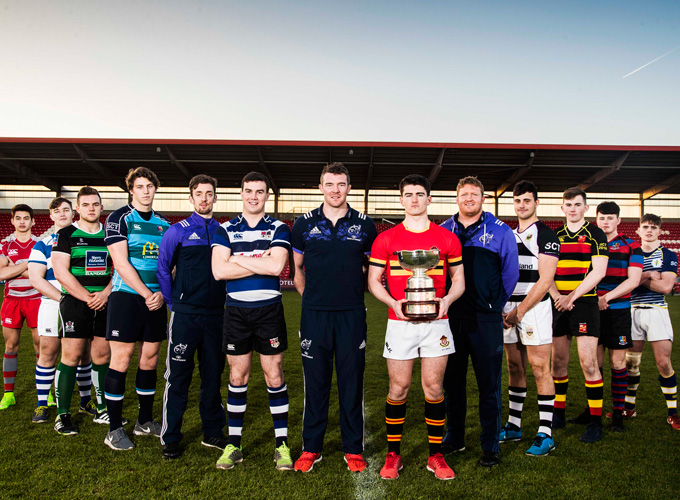 It’s been another busy couple of months for the Munster squad as they took some time out to visit and support a number of schools, charities and community initiatives across the province. Here is just a snap shot of the worthy causes they supported and the wonderful people they met en route.

The draw for the Clayton Hotels Munster Schools Senior and Junior Cup competitions took place in Cork at the beginning of December and three products of the Munster Schools pathway were on hand to help launch this year’s competition – Darren Sweetnam (Bandon Grammar), captain Peter O’Mahony (PBC) and Stephen Archer (CBC).

Mike Sherry, Duncan Casey and Cathal Sheridan were in attendance at a first year rugby blitz in Crescent College Comprehensive that was recently run by Munster Rugby.

The blitz took place to cater for the nee

There were over 200 participants in the day’s activities.

Deerpark were participating for the first time and teams were lucky enough to have an impromptu training session between games with Munster’s Dave O’Callaghan and Kevin O’Byrne who also mingled between games meeting the players.

Munster staff and players recently helped Limerick Sports Partnership in running events for people with special needs. Munster staff members Kenneth McNamara and Tyrone Elliot were accompanied by Cathal Sheridan and Mike Sherry to help out on the day,

Held in the UL Arena, the event was a Sportsability day run by Elain O’Shea of Limerick Sports Partnership. The day was an opportunity for special needs schools and services to come and try a number of different sports and activities.

Tommy O'Donnell, Robin Copeland and Niall Scannell lined out to support one of Munster’s nominated charities this season, the Alzheimer Society of Ireland, for their annual Memory Ribbon campaign.

The Alzheimer Society of Ireland's Memory Ribbon campaign at www.memoryribbon.ie calls on the public to share treasured memories of their loved ones affected by dementia while donating to this worthy cause.

Engineers Without Borders Ireland is dedicated to bridging the gap between academia, industry and NGOs to give Irish engineers and scientists opportunities to learn about and contribute to sustainable development globally. Their mission is to partner with disadvantaged communities to improve their quality of life through education and implementation of sustainable engineering projects.

In supporting their cause, Billy Holland gave a tour of Irish Independent Park to a group of first year engineering students where they looked at the structural aspects of the recent €;3.2m redevelopment at the venue.

Francis Saili was among the special guests at the Canon Hayes National Sports Awards in Tipperary town at the beginning of December. The Munster squad were recognised on the night for their win over Maori All Blacks.