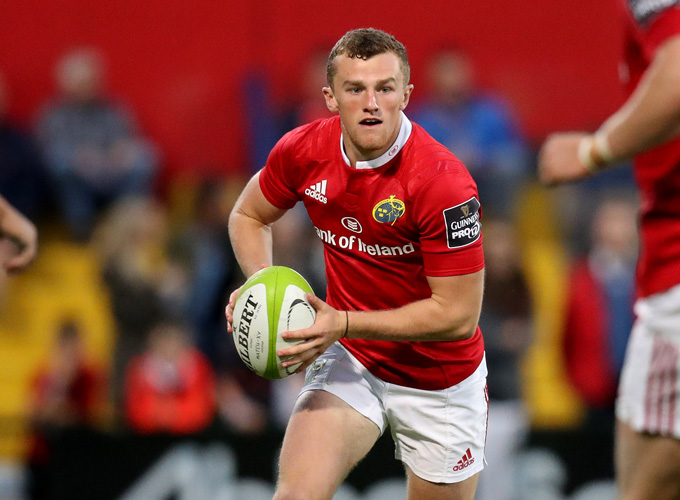 “It’s great to have such excellent representation. Fineen (Wycherley), Calvin (Nash) and Gavin (Coombes) are all in the full academy with a large representation coming from our sub-academy ranks also. Every time these lads take to the field these days they have the opportunity to get noticed, be it in the AIL or the B&I Cup. We get the footage for all these games and we use that to track their progress.

“It’s such an important squad to be selected for as the games against Munster and Leinster development sides will determine selection for the 2017 Six Nations. The game against Leinster Development happens this week with the Munster Development game happening at Thomond Park next Thursday (29th) at 1pm. All those in the mix for Irish selection will either represent Ireland or their province over the two games. It presents them with a massive opportunity and they need to grasp it to be in the running for the Six Nations squad which will be announced in January.”

Click here to view the full Ireland U20 training squad.


Back to back Munster A wins over Rotherham Titans…

“Like all Championship sides they are big and physical and it was excellent that our young lads together with some of the seniors were able to match them on that front. That allowed us to play. Our discipline let us down a bit in Rotherham and although we had some very good passages of play, we were inconsistent at times. Things were that bit smoother in the return fixture in Ennis. We had excellent home support which is always nice and the boys duly showed what they could do on the pitch. View match highlights below.

“With such massive competition for places in the European squad, that has a knock on effect for Munster A as we get to field an excellent blend of youth and experience. Wanting to get first-team involvement gets the best out of the senior lads and that in turn spurs on the younger academy lads whom we encourage to play and express themselves as much as we can.”

Munster A resume their campaign away to Doncaster Knights on Saturday January 7th before bringing the return fixture to Bandon RFC on Friday January 13th at 7pm.

“This Sevens experience will stand massively to Shane. We saw what it did for the likes of Dan Goggin in the past couple of seasons and also Alex Wootton who has now progressed to the senior squad.

“It was big in the part of Scotland where I grew up and I played it as a youngster. You can’t hide in Sevens and it really brings your core skills to the fore. You get a lot of touches, every player has heavy involvement in Sevens and that will only help develop Shane as a player.”

“Gavin Rackard our nutritionist has overseen these demonstrations in the High Performance Centre and I’m pleased to report that he has been impressed with the players’ culinary skills.

“It’s not the first time we have run cookery modules for the players, but the main difference here is that now we can do them in-house in the wonderful facility that is the Greencore Group Kitchen in the High Performance Centre. Not only is there everything the lads need to cook for themselves in there, but it was also designed with education in mind and is ideal for demonstrations such as this.”

“The more accessible facilities such as a proper kitchen are, the more likely players are to cook so that bodes well.”

“We do a collection with the boys every Christmas and this year they headed to the Milk Market in Limerick where they raised funds for Focus Ireland. It gives them a bit of grounding that some people are not as lucky as they are and, just like every year, the lads really enjoyed supporting such a worthy cause.”

“Bill Johnston (ankle) as reported earlier this week will be sidelined for 8 to 12 weeks.

“Vincent O’Brien picked up a suspected concussion in the win over Rotherham on Sunday and continues to be assessed before beginning return to play protocols.

“Also from that game, Brian Scott has undergone a scan for an elbow injury and is waiting on the results.

“Sean O'Connor has undergone surgery for an ankle injury and will miss the next 12 weeks of competitive action.

“Stephen Fitzgerald (ankle) is now in the final stages of his rehab and we’re hopeful that he’ll make a return to action with the Munster Development side in Thomond Park next Thursday.

“JP Phelan (hamstring) is about 4 to 6 weeks away from a return as is Ben Kilkenny (neck) who has now progressed to modified on-field training.

“Conor Oliver (hamstring) is getting closer to a return and will take part in modified training this week.

“John Foley (groin) is in line for a return next week where he will feature for either Ireland U20 or Munster Development on Thursday.”