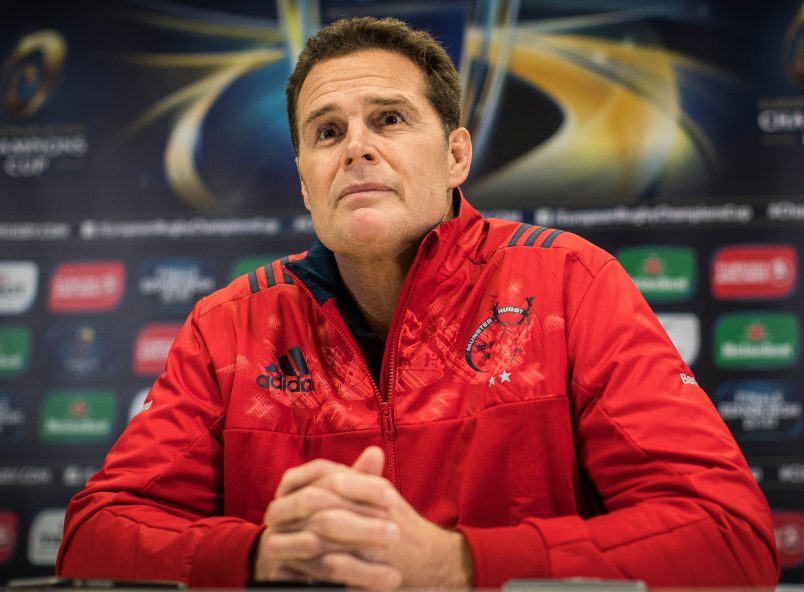 While proud of his side’s performance in the stunning 38-0 Champions Cup victory against Leicester Tigers, Rassie Erasmus has already set his sights on the return clash in Welford Road next Saturday (3.15pm)

A capacity crowd of 25,600 cheered Munster on to an emphatic victory at Thomond Park with Tyler Bleyendaal kicking four penalties and converting Simon Zebo’s try to give Munster a 19-0 half-time lead.

Two further tries from Jaco Taute and a penalty try when the South African centre was tackled without the ball as he chased his hat-trick in the second half secured the bonus point win (full report here).

An altogether different challenge awaits next week however with a big backlash expected from the wounded Tigers at their home fortress.

“With the quality players in the Leicester side and with them beating us last year at home and away we knew they wouldn’t have any fear coming here, we were a bit nervous about the whole game,” admitted Erasmus after yesterday’s victory.

“We never thought about getting five points out of it, our aim was always just to win the game so it was a real bonus to get the fourth try at the end against a team we respect so much with some brilliant individuals. They are really well coached so we are very happy with the performance but we have to go over to Leicester next week. We certainly won’t get carried away with it, it will be a really tough challenge.

“Things change quickly. I’m not trying to make us the underdogs but if you look at Glasgow, they have been struggling for the last four or five games and then they went and beat Racing away, so that’s the nature of the beast. You play against international players and sometimes things just sync and everything clicks and you are happy with the performance.

“We have been fortunate now for six, seven weeks. The guys have been really working hard and also a lot of things have gone our way in the games. I’m proud because sometimes we make errors but the effort is still there and that is something we are thriving on and enjoying.”

Munster now have maximum points from their first two games and lead Pool 1 but the province's next three games in the Champions Cup are all away from home in an incredibly difficult run of fixtures.

“We are under no illusions, we have only played two pool matches but we will enjoy tonight,” said Erasmus yesterday. “We are fairly happy with the way we played. [This season] is already something special for us. We have achieved nothing but we certainly have belief in what we are trying to do and how we are trying to do it.

“It might take two or three years to get to the top but we are going in the right direction, which is positive. It might not happen this season – that we go as far as we want to go – but we are certainly seeing some improvement every week in the different areas of the game and that’s a positive.”