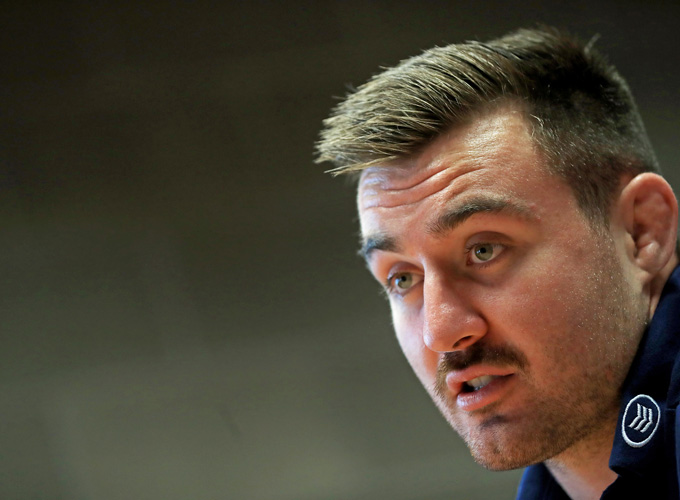 Having featured in every game of the campaign to date, winger Darren Sweetnam and hooker Niall Scannell are this week preparing for what is consistently a formidable challenge in any PRO12 season – a trip to Scotstoun.

Munster might not have won at the Glasgow venue in over three years, but as Sweetnam alludes to, he and his teammates carry winning momentum and confidence from the provincial and international realms into this weekend’s game.

“Things are going well and it’s nice to be sitting at the top of the table.  The same goes for Ireland, they had “But we can’t get carried away.  Here in Munster, we’re heading into a tough few weeks so we need to keep the heads down, work hard and take it game by game.”

Munster’s comprehensive Champions Cup win over Warriors in the wake of Anthony Foley’s sudden passing might have been a performance for the ages, but now, according to Scannell, it’s about backing that performance up against a Glasgow side looking to make amends for their 37-18 defeat at Thomond Park in October.

“Scotstoun in general is just a very hard place to go and I think every opposition team knows that.

“It was a very emotional occasion last time out and fair play to Glasgow that day, they played their part and were very respectful of what we were going through.  It was a very tough and physical game and we were just delighted to come out the right side of that against a very tough Glasgow team.  But that was just one game, and to do that three more times is no easy feat.

“We’ve been through a few difficult things this year and I suppose it’s brought us closer together.  We’re enjoying that, enjoying the results and enjoying playing the way we want to play.  But that doesn’t count for anything unless going into this crucial block we carry that momentum forward.  And we’ll need all the momentum we can get, after this weekend it’s Leicester Tigers back to back before we face Leinster and Connacht, and then it’s straight back into Europe.”

With an increasing number of teams now installing artificial pitches, much has been written about the surface and how it impacts both hosting and visiting sides.  Glasgow are one such side to have installed a 4G pitch with Sweetnam explaining what he finds to be the main difference.

“Those pitches are definitely different.  You are almost bouncing off the grass whereas on grass your foot gets stuck into the ground a bit more.  I guess it suits us back three players a bit better.

“It will be very tough against them (Glasgow) on that type of surface.  It suits them and the type of game they play, a fast offloading game and more than anything that will require our defence to be on the money.  It will be an excellent test of us.”