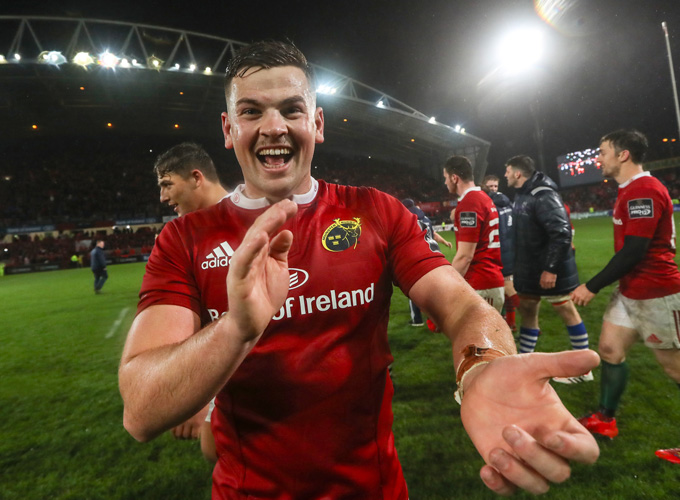 “It was fantastic to have so many guys involved. Conor started the game and for Sean and John, what a game to make their senior debuts. It was going to be a really big step up but you could see during the week how much they were really looking forward to it. They were also a bit nervous of the daunting task in front of them, which is only natural, but the senior coaches and players rallied around them to make sure they were properly ready for Friday night. We saw some great stuff in the game as a consequence.

“Sean was able to draw on his experience of defeating New Zealand at the World Rugby U20 Championship earlier this year and is a good example of an academy player who has trained a lot with the seniors of late so that made the transition to that level all the easier.

“With the internationals away and a few of the seniors injured, a number of opportunities are presenting themselves and we are lucky that we have a lot of fit bodies with the lads primed and ready for action given their involvement with the AIL.

“In the run up to Christmas exams we are always encouraging guys to get the balance of training, study and life right. One is as important as the other and the proper planning of each in essential. These weeks the stress and fatigue levels are up a bit higher than usual and we try to manage that accordingly and make sure that exams are getting the required attention.”

“A two-day camp was held in Galway last week and we had 13 players involved although John Foley did have to be withdrawn as he prepared for the Maori game here in Munster. Gavin Coombes, Fineen Wycherley, Calvin Nash and the returning Bill Johnston joined a large number of our sub-academy players in the camp as preparations step up for next year’s U20 6 Nations (full list of representatives below).

“Once again this Christmas we’ll see Ireland U20 take on a Munster A/Development side (Thomond Park, December 29 at 1pm) and they’ll do the same in Leinster. Everyone still in the mix for Irish selection is given 80 minutes in one of the games or they are involved in both games, playing for either Ireland or their province.”

“We knew the threat that a big physical side like London Welsh were going to bring. We managed to execute certain elements of our game as well as we would have hoped – how we took them on at scrum time for example. We have a young group who, in general, did ok at set piece but unfortunately were unable to maintain it for the whole game, giving Welsh momentum at critical times in the second half.

“Welsh themselves played a good kicking game and made it a real learning curve for our lads, some of whom were making their first B&I appearance. Make mistakes or have concentration lapses at that intensity and you get punished for them – that was one of the real lessons guys took from the experience.” See match highlights below.

Next up in the B&I Cup Munster A face Rotherham Titans away at Clifton Lane on Saturday December 10th at 2pm.

“Shane Daly, Ned Hodson, Greg O’Shea and Steven McMahon have all been involved with the Irish squad who are currently preparing for the Dubai 7s. We hope that some, if not all, of those guys are selected.

“In recent seasons guys like Dan Goggin and Alex Wootton featured heavily for Ireland 7s and we see now how that has benefitted their 15s game.”

“Bill Johnston (shoulder) returned to action last weekend and played 40 minutes in Garryowen’s big win over St Marys in the AIL. He came through it fine and will now look to build on his game time in preparation for Munster and hopefully Ireland U20 duty.

“Stephen Fitzgerald (ankle) has now progressed to plyometric training and, depending on his ankle’s reaction to that, his return date is in and around the New Year.

“Sean O’Connor sustained a concussion in the win over the Maori All Blacks and is currently being monitored before beginning his return to play protocols.

“Calvin Nash (shoulder) did attend the Ireland U20 camp but only took part in non-contact drills. He has begun his return to contact and should be available for selection in the very near future.

“JP Phelan (hamstring) and Ben Kilkenny (neck) are both following their rehab programmes but as of yet no final decision has been made on expected return dates.”