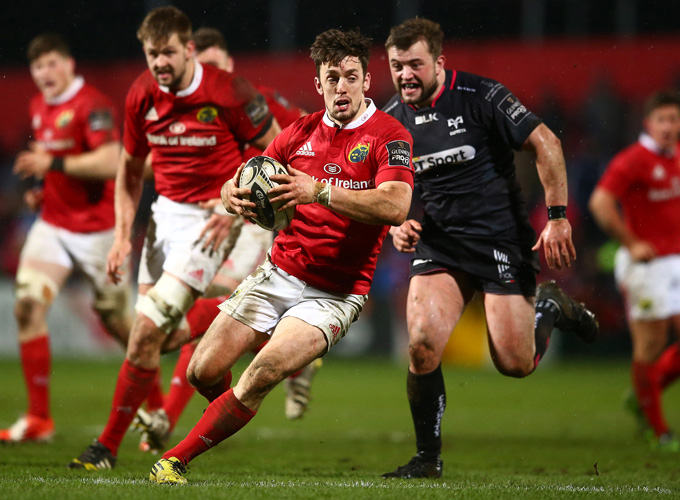 Little separates the sides as fourth hosts second when Munster welcome Ospreys to Irish Independent Park, Cork this Friday for round 8 of the Guinness PRO12 at 7.35pm.

As the PRO12 approaches its interval for the Autumn Internationals, all eyes are fixed on the summit of the table, a goal that is within reach for both sides entering this weekend’s duel on Leeside.

Level on points with table toppers Leinster, all that separates Ospreys from the eastern province is a single win – Ospreys winning 5 from 7 as opposed to Leinster’s 6 from 7. Munster meanwhile might lie three league points adrift in fourth, but have also won 5 from 7, and it’s Ospreys and Glasgow Warriors’ ability to pick up bonus points that keeps them ahead of the Munstermen in the league standings.

Ospreys home form best illustrates their ability to pick up crucial bonus points of late, securing bonus point wins in their last seven home encounters across all competitions. Heading to Cork this weekend, the Welshmen have also impressed on the road, securing a bonus point win over reigning champions Connacht at the Sportsground and running Ulster close in a narrow 9-7 bonus point loss at the Kingspan Stadium.

Munster may be without their six Irish internationals included for this weekend’s test against New Zealand in Chicago – John Ryan, Billy Holland, Conor Murray, CJ Stander, Simon Zebo and Donnacha Ryan – but so too are Ospreys minus their international contingent including the likes of Rhys Webb, Dan Biggar, Alun Wyn Jones and Dan Lydiate.

Still, this weekend will make for some fantastic battles on the fast surface at Irish Independent Park. Ones to watch in the Ospreys camp include full-back Dan Evans who has made more yards than anybody else in the Championship so far while Josh Matavesi, who makes the move from centre to fly-half in the absence of Biggar and Sam Davies, recorded the most offloads in round 7 and has provided no less than four try assists in the current campaign.

From a Munster point of view, Rory Scannell and Jaco Taute have formed a formidable partnership in midfield, one that has netted the province five tries in the last three games across all competitions, and it was Scannell’s drop-goal that bagged Munster another famous win away to Ulster last Friday night.

History does not lend itself to predicting a winner of this fixture with Munster’s last two home losses in the PRO12 coming in Cork to Cardiff Blues and Ospreys while the Welsh visitors have only won two of their last 12 games against Irish opposition. The last six meetings between the two sides have been evenly split with three wins apiece, but Ospreys have lost on just two of their last six visits to Munster.

Tickets can now be purchased online here and from the Munster Rugby Ticket Offices in Irish Independent Park and Thomond Park.

Munster Return To Cork This Friday