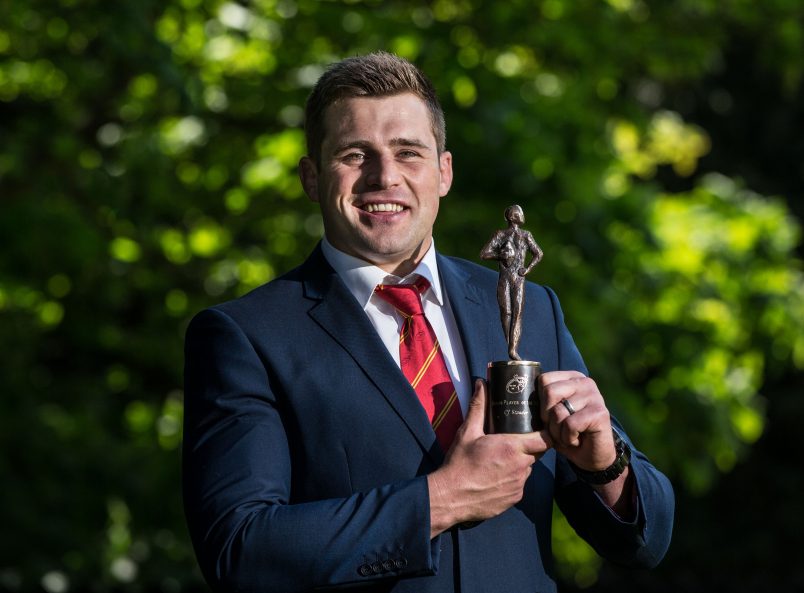 CJ Stander became the first player to claim the Munster Rugby Player of the Year award for the second year in succession at today’s annual Munster Rugby Awards, in association with the Irish Independent.

CJ Stander became the first player to claim the Munster Rugby Player of the Year award for the second year in succession at today’s annual Munster Rugby Awards, in association with the Irish Independent.

Over 240 people attended the event which took place at the Clayton Hotel Silver Springs in Cork with eleven awards presented to worthy recipients involved in professional and domestic rugby in Munster.

The full Munster squad, Head Coach Anthony Foley and Team Manager Niall O'Donovan were all in attendance, joining domestic game volunteers in recognising and honouring rugby achievements across the province.

CJ Stander was named this year's Munster Rugby Player of the Year after a hugely impressive season.  The South African picked up the award for the second year-in-a-row after scoring seven tries in 21 appearances, and captained the side on 18 occasions. He also picked up four man of the match awards and was most recently named in the Guinness PRO12 Dream Team.

Additionally the backrow forward claimed a man of the match award on his International debut against Wales and started in all of Ireland’s 6 Nations games, while last week he became the first ever player to win the IRUPA Players’ Player of the Year award and Supporters’ Player of the Year.

After enjoying a breakthrough season in his final year of the academy programme the 22-year-old played for Munster on 26 occasions, making the number 12 jersey his own since December, and scored 4 tries, kicking 10 points.

The Dolphin club man made his competitive debut against Cardiff Blues in November 2014 at 20 years of age.  A former Ireland U20s' star that played across the backline, the Cork man was part of the Tblisi Cup winning Emerging Ireland squad in June 2015.

Siobhan Fleming was the recipient of the Women’s Player of the Year, winning the award for a third time.  A former Kerry footballer who won her first Munster cap in 2010, by 2013 the Tralee RFC clubwoman had helped Ireland to Grand Slam victory and was part of the 2014 Ireland Women’s World Cup squad that defeated New Zealand in France.

One of the province’s most senior players this season, she led by example on the field and played a standout role in Munster’s retention of their Interprovincial title (their 11th in total), starting every game.

Referee of the Year – Frank Murphy
A former Munster, Leicester Tigers and Connacht player, Frank Murphy joined the MAR as a trial member in November 2014. Showing a good aptitude for officiating from the off, the Cork native joined the IRFU Interprovincial Appointments System the following January and strong performances saw him selected for the IRFU National Referee Panel in February 2015, making his AIL debut in Armagh the same month.

Going from strength to strength the former scrum half – who holds an English Premiership title amongst his honours – has now progressed to AIL Division 1 and British & Irish Cup matches and this season his refereeing highlights include; Bedford v Jersey in the B&I Cup quarter-final, Germany v Portugal in the European Nations Cup and Wales v Italy in the Under 20 Six Nations Championship.

Hall of Fame Award – Phil O’Callaghan
A Dolphin RFC clubman, O’Callaghan made his Munster Senior Cup debut in 1961 having only taken up rugby the previous season and continued to play in the competition every year up until 1980.

On the international front the Corkman won his first Irish cap in Ireland’s historic 15-8 victory over Australia in January 1967 – the first time an Irish team defeated a southern hemisphere side on their own soil – and in total earned 21 caps for his country between 1967 and 1976.

Enjoying an international career that spanned just short of a decade, O’Callaghan also toured Argentina and New Zealand with Ireland and represented the Barbarians invitational side between 1967 and 1969.

Noted for his personality both on and off the pitch, during an International fixture, referee Merrion Joseph penalised Phil in the scrum, saying, “your boring O’Callaghan”, to which he replied, “you’re not so interesting yourself, ref!”

Senior Club of the Year – Cork Constitution FC
Cork Constitution have had an incredible run this season at various age grade and senior levels. Their senior team made history by claiming four Bateman Cup titles in a row, the first time this has been achieved since the competition’s inception in 1886.  The Cork side also reached the final of the All Ireland League where they were narrowly defeated by Clontarf at the Aviva Stadium.  Silverware is still on offer for Cork Con who will defend their Bank of Ireland Munster Senior Cup title against Young Munster tomorrow at Thomond Park.  Their second team won the Munster Seconds league and also reached the final of the Munster Junior Cup.  The club’s U20s won this year’s All-Ireland Frazer McMullan Cup and were undefeated throughout the season.

Junior Club of the Year – Bandon RFC
In their first year promoted to Division 1 of the Muster Junior League Bandon RFC claimed the runners up spot, finishing five points adrift of Clonmel RFC, who incidentally were last year’s Junior Club of the Year. The West Cork club also reached the semi-final of the Munster Junior Cup losing out to eventual winners Young Munster.  Bandon’s second team also challenged for honours in the Junior 2 Cup, ending their campaign as runners up to Highfield.  The club also reached the final of the Bank of Ireland Munster U16 Cup at Thomond Park while their women's side also experienced success reaching the final of the Munster Division 2 league.

Club Youth Section of the Year – Waterpark RFC
With over 150 members in their youth section, Waterpark RFC have had considerable success this season at underage level.  In an impressive double, Waterpark claimed the Bank of Ireland Munster Under 18 Cup and Under 16 Cup last March at Thomond Park.  This was their third Munster Under 16 Cup title in a row, while they, along with the Under 14 side also won the East Munster Cup at their respective age grades.  The Waterford outfit had three players represent the Munster Under 18 Clubs in last September’s interprovincial series and the club have formed an Under 15 and Under 17 girls’ side who will compete in next year’s league as the club continues to focus on the success and growth of their underage section.

Club Mini Section of the Year – Corca Dhuibhne RFC
The 2015/16 season has been the most encouraging for years for Rugbaí Chorca Dhuibhne's Mini's. For a sparsely populated area, the West Kerry club managed to have 60 minis togged out every Saturday morning, almost doubling numbers of previous years. Rugbaí Chorca Dhuibhne had enough numbers and strength to attend the under 11s competition in Garryowen in March and the under 12s competition in Rockwell – this would have been unheard of two years ago. The rugby future is looking bright in west Kerry.

School of the Year – Christian Brothers College
In March the Cork school claimed their 29th Clayton Hotels Munster Schools Senior Cup title at Irish Independent Park, leading the roll of honour of most cups won since the competition’s inception.   In what has been a remarkable season for CBC, they also retained the Br. O’Reilly Cup, claimed the Bowen Shield, Kidney Cup and reached the Clayton Hotels Munster Schools Junior Cup final.   Adding to their silverware CBC were also McCarthy ‘B’ Cup winners and reached the final of the McCarthy ‘A’ Cup.