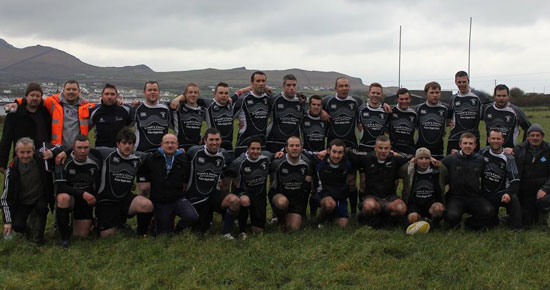 With the weather dominating the weekends program only five competitive games were played in the Province.

There were great celebrations in Cahirciveen on Saturday night after Iveragh Eagles lifted their very first trophy with a 40-3 win over Kenmare at Castleisland in the Galwey Foley Cup Final. Paul Coffey, Brian Goggin, Mickey O’Shea and Maurice Dwyer scored tries for the winners and Brian O’Leary kicked four conversions and four penalties. Albert O’Sullivan Greene replied with a penalty for Kenmare.

Kanturk closed the gap at the top of Division1 of the Munster Junior League to two points after an 11-5 home win over Galbally. All the scores came in the opening half with Dan McCabe scoring a try for Kanturk and Darragh Meade adding two penalties. Timmy Casey replied with a try for the visitors.

Having lost top spot to Mallow last week in Division Two, Muskerry moved three points ahead of their near rivals with a 24-6 win over Presentation at Ballyanly. The home side played against the elements in the opening half and led 8-6 at half time with a try from Willie Healy and a drop goal by Jonathan Buckley. Mark Phair replied with two penalties for the Limerick side. Ben Murphy and Jaydee Meyer scored further tries for the winners and Buckley added two more drop goals

Carrigaline made sure of their place in the second phase of the Junior Two League South with a 33-5 away win over Skibbereen. Kieran Kelleher, John Tait, Ray Donoghue, Steve Caul and Darren Twomey scored tries for the winners. Donnacha Kiely and Sean Lucey each kicked two conversions.

Mallow caused a surprise at the Mahon with a 12-11 win over Dolphin. Rory McSharry kicked four penalties for the winners with the final one hitting the crossbar and going over with three minutes remaining. John O’Donovan replied with a try for Dolphin and Tim Cotter kicked two penalties.