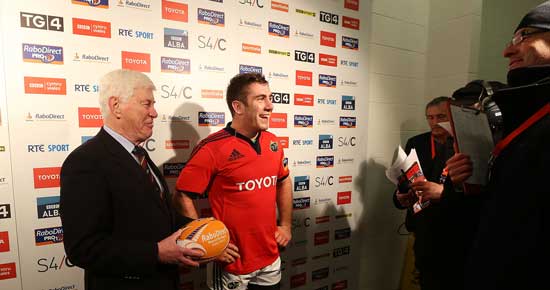 We talk to JJ Hanrahan and Ian Keatley after Munster’s victory against Zebre in the RaboDirect PRO12 and we also show you highlights from the evening’s action.

Hanrahan On First Start and Tries – We catch up with JJ Hanrahan after making his first start for Munster against Zebre in the RaboDirect PRO12 in Thomond Park. This video is brought to you by the students of LIT. View here.

Munster Back On Track – We talk to Ian Keatley after Munster's 29-3 victory against Zebre in Thomond Park. This video is brought to you by the students of LIT. Watch the interview here.

RaboDirect PRO12 Match Highlights: Munster v Zebre – We show you the tries scored against Zebre at Thomond Park on Friday night. Munster secured a bonus point 29-3 victory against the Italian side and JJ Hanrahan scored two tries on his first start for Munster with Felix Jones and Luke O'Dea adding one each. Watch here.

Friday Night Frights At Thomond Park – Check out Friday night in Thomond Park where we kicked the night off with a Halloween Party in The Dugout before Munster took on Zebre in the RaboDirect PRO12. Check out the video here.