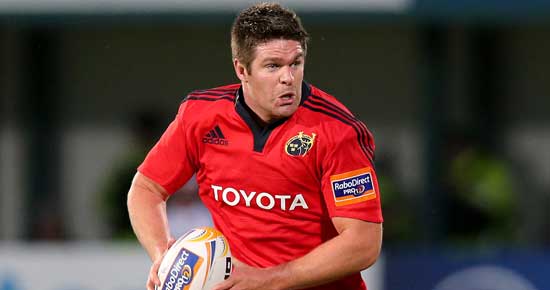 As the focus switches back to RaboDirect PRO12 action this week we talk to Billy Holland about Munster’s five day turn around and preparation for Friday night’s 7.45pm ko in Thomond Park against new Italian side Zebre.

Munster have lost their last two Rabo games away to Ospreys and Leinster and now face bottom of the table Zebre on Friday night.

Billy Holland confirms Munster are taking nothing for granted as they look to return to winning ways in the competition, "We’ve lost our last two Rabo games so we’re very conscious we need to get back on the wagon straight away. We haven’t played at home in the Rabo since the Dragons game, which we did well in, so we are looking forward to it. We had a good result at the weekend and we’re just keen to get back out on the pitch again.”

“I think it’s our only 5 day turnaround up to the New Year, and we spoke about it in the dressing room straight after the game on Sunday, it was a Heineken Cup win, but we need to focus straight away on Zebre this weekend."

to meeting up with his old team-mate, "A friend of mine Dave Ryan plays out there and he’s been doing very well so we’ll be looking forward to seeing him after the game."

"They’re a new team, and they might have struggled a bit at the start but they’ve come together a lot in the last few weeks. They challenged Biarritz in awful conditions last week and they lost. A lot of the scorelines have been very harsh against them, they’ve competed very well but conceded a few points right at the very end of the game."

"They’ve a lot of big names in their team, and they are growing nicely. Aironi grew over the two years they were a club, and a lot of those players are with Zebre now. We don’t have a huge amount of knowledge of them, but we have plenty of footage and you can see them growing week by week, so we know there’s good performances in them.”

Tickets are on sale for this game with Special Halloween Family Packs on offer for €;40 for 2 Adults and 4 Kids.

There is also a Free Halloween Fancy Dress Party in The Dugout in the East Stand from 6pm with more details available here.