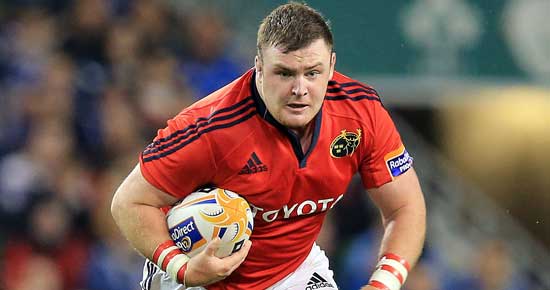 Not surprisingly Dave Kilcoyne was today named in a 31 man Ireland squad for the 2012 Guinness Series games against South Africa, Fiji and Argentina.

Kilcoyne has impressed in his recent Munster appearances including two Heineken Cup games against Racing Metro and Edinburgh.

After completing his second year in the Academy the 23 year old prop secured a Senior contract going into season 12/13 and has embraced the move with gusto, featuring in 7 of Munster’s 8 games this season.

The Limerick man is one of four uncapped players named in the Ireland squad, and is joined by Leinster's Richardt Strauss amd Ulster's Iain Henderson and Luke Marshall.

Munster Forwards Coach Anthony Foley has been added to the Ireland Coaching team and will lead the defence plans and systems allowing Assistant Coach Les Kiss to lead the attack shape for the team as well as continue to coach the backline.

Foley will remain working with Munster Rugby outside of the international window and said the following about his appointment, "I was delighted when Declan approached Rob and me about the possibility of working with the Ireland team again. I enjoyed the opportunity I got during the Six Nations working with the players and I felt once we were all comfortable with the balance between Munster and Ireland, I jumped at the chance. I certainly feel I can contribute positively and when you get the chance to coach with your country, you don’t want to pass it up."

Nine Munster players have been named in total with the full squad listed below.

Ticket sales have reached over 46,000 for the South Africa game with only a limited number of categories available for purchase from www.irishrugby.ie and www.ticketmaster.ie. While the Argentina game is a full month away, ticket sales are at just over 37,000 tickets and are selling quickly and have already surpassed the attendance the last time Argentina visited the Aviva.