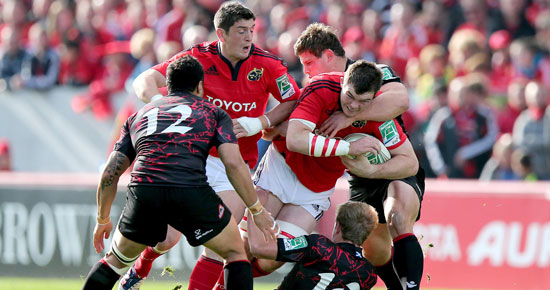 Two Ian Keatley penalties were all that separated Munster and Edinburgh at half time at Thomond Park Stadium but a second half performance that included tries from Conor Murray, Peter O’Mahony, Sean Dougall and a last minute try from Damien Varley secured the bonus point victory in round 2 of the Heineken Cup today.

Munster dominated in the first half and played all the rugby but never looked to break the Edinburgh line only claiming two penalties from Ian Keatley.

It was the 50th minute before Murray went himself from play and touched down right under the posts. Keatley added the conversion and kicked a penalty 6 minutes later to extend the lead to 16 points.

Penney rang the changes after the 60 minute mark with Felix Jones making his return to Heineken Cup rugby, JJ Hanrahan making his Heineken Cup debut and Paddy Butler coming on for his 2nd apperance at this level.

Peter O'Mahony and Sean Dougall were next to score within minutes of each other, and with 6 minutes remaining on the clock a sense of expectation filled the stadium for Munster to claim the bonus point try.

And the players delivered. Keatley kicked for touch going for the lineout and Damien Varley found himself diving over the line on the 80th minute. Munster 33 Edinburgh 0.

All Clear From The Weekend