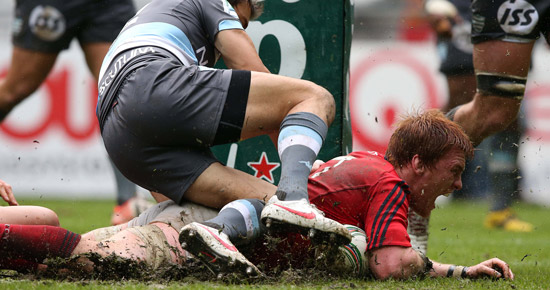 Sean Dougall experienced the highs and lows of Heineken Cup rugby last Saturday in Paris from scoring a try on his debut to ultimately suffering defeat at the hands of Racing Metro.

Talking about the experience 22 year old Dougall commented "I knew it was going to be intense and there was a different atmosphere about the place all week in the build up to it.

It definitely lived up to its expectations, but then it was pretty gutting to lose like that, especially when we came so close. But it’s good for me to get an experience like that under my belt and we all just need to push on from there now.

Running out at Stade de France was brilliant. It’s the biggest stadium I’ve played in and it was incredible with a great atmosphere from all the Munster fans that made it over to it. It was nice to get the try but the fact that we lost really just overshadowed that.

The game wasn’t probably as quick as I thought it was going to be but that was more to do with the weather, the rain and the pitch limited that. But at the same time it was very physical and they were a very big pack. The whole occasion was something extra and was just that much bigger than the league."

After lining out against Edinburgh already in the RaboDirect PRO12 Sean is adamant this weekend presents a whole new challenge "It’s the Heineken Cup this time, so everything’s so much more intense and teams are just so up for it. Edinburgh had a bit of a loss at the weekend against Saracens and I’m sure they’ll be firing on all cylinders to prove a point.

But for us it will be nice just to be at home again after being on the road for three weeks. So if I get the chance to be involved it would be great, playing in Thomond Park in the Heineken Cup is what you dream of.

I’ve heard so much about Thomond Park’s match day atmosphere on Heineken Cup day. The lads have told me it’s “hairs on the back of the neck kind of stuff”, so I’m just hoping I get to experience that this Sunday.

The whole occasion is just meant to be unbelievable and we just need to focus on the task ahead of us, getting the win!"