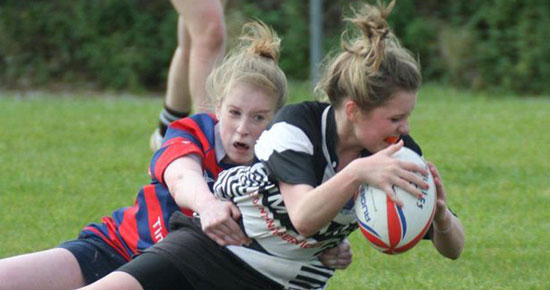 The inaugural "European Town of Sport Cup" sevens competition for U18 girls was recently hosted by Thurles RFC which proved to be an ideal platform for clubs to showcase the progression of age grade rugby for girls across the province.

A total of 6 clubs took part in the competition with teams from Mallow RFC, Abbeyfeale RFC, Carrick on Suir RFC, Portlaoise RFC, Fethard RFC and two teams from Thurles RFC.

Conditions were perfect on the day for running rugby and that’s exactly what was served up by the girls, with no signs that this was in fact, the first outing of the season for most of the teams.

All teams competed within two groups with the top three teams from each group progressing to the “Shield”, “Plate” and “Cup” finals.

First up was the European Town of Sport Shield Final which saw Abbeyfeale take on Thurles A. While the Tipperary team were a very physical side, the girls from Limerick proved to be too strong out wide and scored some excellent tries to claim the victory.The European Town of Sport Plate Final saw a lively Carrick on Suir side prevail over a very strong Mallow team.

The days events were rounded off with the first ever European Town of Sport Cup Final contested by the two group winners and served up a magnificent clash between last seasons 7s champions of Munster and Leinster.

Both Thurles and Portlaoise had come through the competition unbeaten and there was very little between the sides approaching half time. Thurles scored the first three tries of the game but Portlaoise always looked like they could score from anywhere on the pitch. The Thurles defence was strong and held out to keep Portlaoise scoreless at the half time whistle.

After the break, the Thurles side seemed to step up a gear and ran in three more superb tries to close out the game. The Portlaoise girls battled hard for the entire game but couldn’t manage to reel in a very fine Thurles team. Thurles captain Emma Byrne received the Cup from Mayor of Thurles Michael Cleary.

Girls in action at Thurles RFC

Munster Have To Settle For Losing Bonus