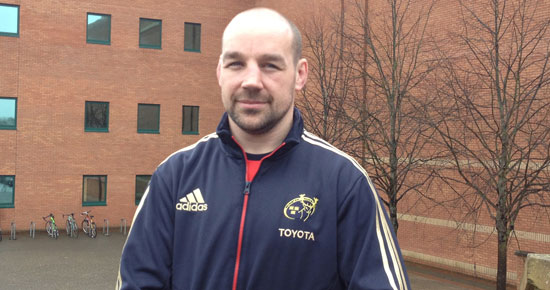 We hear from Munster Rugby Academy Manager Peter Malone as he talks about the new players that joined the academy this week.

"We have two new additions to the Munster Rugby Academy, Harry McNulty and Darren Sweetnam, and we selected them after the Interprovincial U20s campaign. Both impressed in the games and we felt that they would do well in the academy and would be excellent prospects for Munster over the next few years.

Harry is an outside centre, who went to Rockwell College and was playing with Dublin University last year where he was involved with an excellent system similar to an academy programme, nearly full time training.

He played for the Irish U19s and has done well for Munster since he has come down. He has got an excellent attitude and it was a big move for him, switching college courses to UL and joining Young Munster, but he is setting in well.

It was a big move for Darren as well in a difference sense, he has been an inter-county hurler who showed very well for Cork in their campaign last year but he has always been a very good rugby player as well. . I think he has got the benefit of a great year playing with Cork and that will stand to him. Playing in front of 60,000 people in Croke Park is a big challenge for a guy doing his leaving cert.

He played for Bandon Grammar all the way up, and was involved with Munster at all age grades. He has traditionally played out-half and would have played number 10 for Bandon but because he came in a bit late with the U20s we put him in fullback and it worked out very well. Darren isn’t position specific at the moment, he is a natural running back anyway so he can slot in to a few of the positions and we will make a decision when he settles in more. He is moving to UCC now which is a great environment for rugby players.

Malone talks about the recruitment drive for the academy, “We target positions that we would feel there is a need for but we only bring them in if the standard is there. We have to get the quality and we wouldn’t compromise on that, the standard has to be high. The idea of the academy is to bring players through to professional rugby and it’s not just to bring guys in to fill positions.”

“We want our academy guys to challenge for Munster contracts over the next few years as we have seen with players like Simon Zebo, Danny Barnes, Conor Murray, Peter O’Mahony, Mike Sherry and Dave Kilcoyne to name a few.”