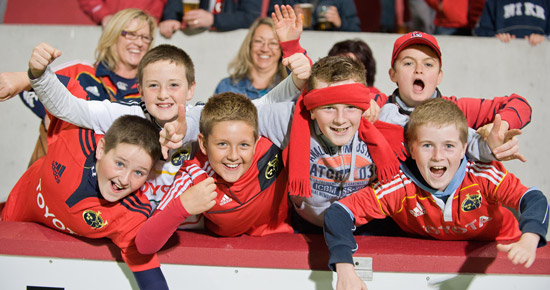 The Munster Rugby Junior Supporters Club is now open to join or renew for the month of October.

The Junior Supporters Club is open to anyone under 16 years of age and gives our younger supporters the chance to be part of the Red Army, offering match day mascot places, exclusive parties and more, all under the watchful eye of Junior Club Captain Simon Zebo.

Membership costs just €;25 for the year and include the following benefits:

Want To Be Match Day Mascot For Munster v Edinburgh in the Heineken Cup?

Junior Club members get the opportunity to enter competitions to be the match day mascot throughout the year. This Saturday junior member Eoghan Moran will lead out the Munster team in the Aviva Stadium when Munster take on Leinster.

And it could be you for Munster's next home game!

The Munster Rugby Supporters Club are looking for a junior member to be mascot for the first home pool game of the Heineken Cup against Edinburgh on Sunday, October 21st.

All you have to do is simply join the Junior Club or renew your membership before this Friday October 5th to be in with a chance! (Winner will be chosen at random).

For more details email mrsc@munsterrugby.ie or call the MRSC office directly on 021-4323737.

Official Launch For The Cup That Cheers